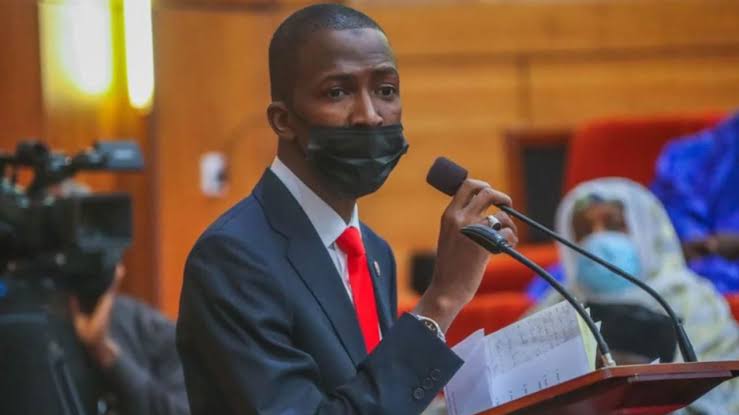 IKEJA – A Lagos based legal practitioner and human rights activists, Mr. Kayode Adaramoye, has condemned the meeting between the Chairman of the Economic and Financial Crimes Commission, EFCC, Abdulrasheed Bawa, and a serving judge, Justice Christopher Balogun in the state High Court, sitting in Ikeja Division.

He said that he was left with no option than to echo his voice on the subject matter after the anti graft agency Chairman accepted responsibility for meeting the Chief Judge but was silent on weighty allegation of meeting the judge in a response to This Day Publication of Tuesday 19 of April, 2022.

He said this in a press released titled: “The Visitation Of Abdulrasheed Bawa, Chairman of Economic and Financial Crimes Commission (EFCC) To The Lagos High Court Judge,” dated 5th May, 2022.

He said the confirmation of the allegation raised by This Day newspaper and some online media has injured the principle of fair hearing on criminal trial of Nadabo Energy Limited, Mr. Abubakar Ali Peters.

Adaramoye said the meeting described by the EFCC as “routine” has cast big doubt of the impartiality of the trial judge in the matter FRN v Abubakar Ali Peters.

According to Adaramoye, the time and venue of the meeting has back-stabbed the principle of fair hearing which is the fulcrum of justice, equity and good conscience.

“I have, as a legal practitioner and a Nigerian, carefully refrained myself from commenting on the issue of the alleged meeting between the EFCC Chairman, Abdulrasheed Bawa and the Lagos State Judge. But I cannot but make my comment after the confirmation of the same by the EFCC as a ‘routine’ or courtesy meeting,” he said.

He further said the time and place of meeting between the Chairman of EFCC, the Chief Judge of the state and the trial judge Justice Christopher Balogun of the Lagos High Court has given them out that it was held in bad faith as it has negative effect on the trial.

He said: “That the EFCC Chairman would have chosen another day and time for the ‘courtesy or routine visit.’ That by stander cannot but read or impute meaning of bad faith to the matter with the ultimate end of compromising the criminal case of Mr. Abubakar Ali Peters.”

He noted that the action of Mr. Bawa to hold meeting with the trial judge has eroded the principle of fair hearing in the trial as their action has arm-twisted justice to the prosecution’s favour.

“That fair hearing is the fulcrum of justice, equity and good conscience. And that the confirmed visit cannot but erode the confidence of the defendant and the society who are interested parties in the ongoing trial in the case. It is thus confirmed that fair hearing on this matter has been arm-twisted and justice cannot been attained in this matter.

” It is therefore against this aforesaid that I believe that the umpire saddled with adjudicating on this matter has been a suspect as to the impartiality of adjudicating in this matter. The confidence always associated with the fair hearing in a trial, very particularly in a criminal trial has been violently tampered with by this inauspicious visit.

” It is the duty of the court to safeguard the rights and liberties of individual and to protect him from any abuse or misuse of power. This dictum of Justice C. A. Oputa in Federal Civil Service Commission & Ors Vs. J. O. Laoye (1989)4 SCNJ (pt.11)146 at179 has been desecrated and violated by the so called routine and courtesy visit of the EFCC Chairman.

“This unfortunate visit becomes more worrisome when it is jusxtaposed against the state of moral tupsy-turvy the country finds itself today. The moral propriety of the meeting is out to serious question and jeopardy.

“It is in the light of the above that in the interest of justice, equity and good conscience that this matter be reassigned to another judge immediately, to do otherwise is to behead justice at dawn.” Adaramoye submitted.

It will be recalled that Mr.Bawa was head of team that investigated the matter long before he became the Chairman of the EFCC. The matter commenced in 2012 and he has been in the witness box for the past five years.

Related Topics:CJUproar over EFCC chairman meeting with serving Lagos judge
Up Next