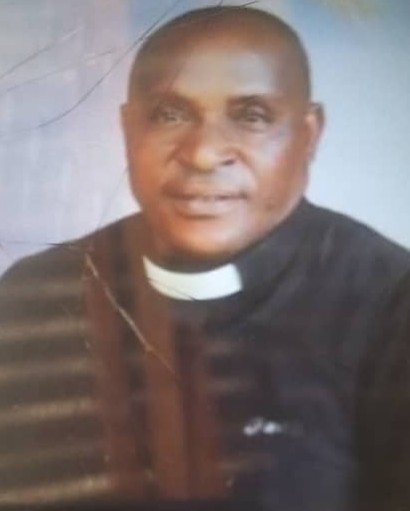 There was pandemonium at the Mountain of Yahweh Deliverance Ministry, Ijegun, Lagos, after a female member, Mrs. Beatrice Odene, disrupted church service by moving to the pulpit and demanding N3m, which the Pastor, Bernard Okoro, allegedly swindled her husband over false prophecy.

TrackNews reports that the incident happened at 21 Tunde Akinshola Street, off Lafunke Street, Papa Major, Ijegun area of Lagos, where the church is located.

The 55-year old Pastor Okoro, who hails from Bende in Abia State, had prophesied to Mrs. Odene that God told him that the destiny of her first son, Emeka, who was in a Polytechnic, was not in Nigeria and Emeka will only make it if he travels abroad and mentioned Canada precisely as where God told him he will make it.

Pastor Okoro pressurized her to inform her husband about the prophecy and that they should raise money to procure the documents for Emeka to travel abroad because he had contact that can give him job over there. The family accepted the prophecy believing that he was a man of God.

However, the whole thing turned out to be a scam after the family sold their property including gratuity paid to her husband after several years of service and gave to Pastor Okoro.

For the past one year, Pastor Okoro has been giving one flimsy excuse; he did not procure any travel documents or send Emeka abroad as he promised.

Narrating what happened, Mrs. Beatrice said that she is a tricycle rider and joined the church two years ago while her husband, Peter, who works in a company was not a member.

An embittered Beatrice stated that sometime last year, Pastor Okoro prophesied to her that they should raise the money to send their son, Emeka, abroad to lift the family from poverty and started calling her Mama Canada.

She stated that she initially told the Pastor that her husband will not be able to fund such a trip and he continued to put pressure on her anytime she attended church service.
She said that one day, her husband came back from work and told her that the company wanted to pay them and lay off some workers because of the economic challenges in the country.

She then told him what Pastor Okoro had prophesied about their son, Emeka, travelling abroad to where he said God had directed to lift the family from poverty.

The husband took interest, they went to the church and met Pastor Okoro. The Pastor repeated what he told Mrs. Beatrice before her husband concerning Emeka. It was there the husband informed him about the payment the company he will receive and gave approval for the processing of documents.

When the pressure from Pastor Okoro became too much, Mrs. Beatrice said she agreed with her husband and sold the tricycle she was riding and went back to the village because she was jobless thereafter.
She narrated that when the husband received the payment from his company, he started transferring the money with hope that Pastor Okoro will get the documents ready and his son will travel abroad.

However, by the time the money finished, Pastor Okoro was still demanding for more money to the extent that it became obvious that he was not procuring any documents. This made Mrs. Beatrice to come back to Lagos from their village in Delta State and went to the church to demand the money from him in the presence of the congregation.

This caused confusion in the church as she disrupted the service and put off the power generating set before Pastor Okoro sneaked out and went to the Police at Isheri Oshun Division and reported the embarrassment to him before the congregation.

The Police summoned Mrs. Beatrice to the station for interrogation and she narrated what happened and her husband confirmed it and presented proof of all the payments.

Both Pastor Okoro and Mrs. Beatrice were detained but later granted administrative bail.

According to Mrs. Beatrice, Pastor Okoro lied to the Police that her husband, Peter, used the money to sow as seed to the church and when he was asked for proof, he was unable to do so before he later agreed to refund the money.

However, there was a twist in the whole matter as Pastor Okoro, who did not refund the money, reportedly told one of the members of his church that he has arranged to transfer the matter to the Lagos Command in order to frustrate the matter before the Commissioner of Police Tactical Squad which was yet to be confirmed from the Lagos Police Public Relations Officer as at the time of filing this report.

Meanwhile, Mrs. Beatrice and the family were said to be frustrated and cannot feed because Pastor Okoro obtained the whole money from them.

“Help, My Husband Has Been Sleeping With My Younger Sister For Four Years’- Woman Seeks Advice