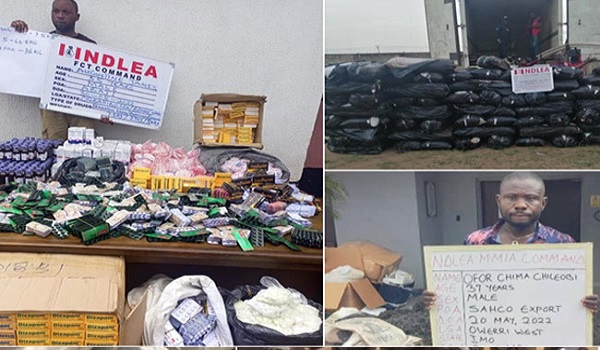 Femi Babafemi, the spokesman of the agency maintained that 11 members of drug syndicates were apprehended in connection with the seizures.

In a statement made available to newsmen yesterday, he maintained that a 35-year-old physically-challenged lady, Kasarachi Onumajuru, who deals in drugs in Umudumaonu community of Mbaitoli council of Imo State was also arrested on May 29.

The statement reads, “First on the list of those arrested in connection to seizures at the two airports is Ofor Chima Chileobi who had on Friday 20th May attempted to export to Dubai, UAE, 200 blocks of cannabis sativa weighing 30.20kg concealed in 40 sacks of bitter leaf through the SAHCO export shed, a cargo wing of the Murtala Muhammed International Airport, Ikeja, Lagos.

“On the same day, 10 cartons of khat with a gross weight of 354.600kg were also seized at the NAHCO import shed of the airport. The following day, Saturday 21st May, a freight agent, Roland Orinami was arrested by NDLEA operatives attached to the local wing of the Lagos airport with1.90kg Loud, a variant of cannabis, factory packed in some bottles while trying to send same via flight to Abuja.

“On Tuesday 24th May, another freight agent, Moshood Azeez Olaide was arrested at NAHCO export shed of the MMIA when he presented a cargo containing psychotropic substances heading to Dubai. The illegal consignment was packed into other items such as canned drinks, liquid bitters and other non-controlled drugs. The seized drugs include Tramadol 225mg, Rohypnol and MDMA. A follow-up operation led to the arrest of another suspect linked to the crime, Olagboye Selim on Friday 27th May.

On the same day, operatives of the Nigerian Customs Service at NAHCO import shed transferred 15 cartons of khat leaf with a gross weight of 256.70kg, which came into the country on Royal Air Moroc to NDLEA command at the airport.”

Related Topics:11 TrackedHuge Drug Seized at AbujaLagos Airports
Up Next