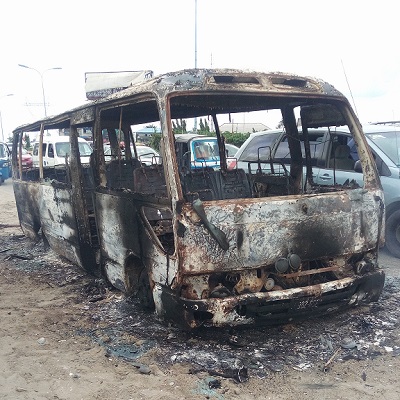 Eighteen passengers were yesterday burnt to death in a road crash in Niger State.

The 18-seater bus crashed in the Gidan Kwano area of Minna-Bida in Bosso council of the state.

The bus was reportedly coming from Lagos but there was speculation as to whether it was heading Kano or Sokoto.

The Nation learnt that the accident occurred at about 3am when the bus ran into a stationary truck and burst into flames.

There was no rescue effort until about 5am when people started gathering only to find the passengers burnt beyond recognition.

It was learnt that two persons were rescued at the scene and taken to IBB Hospital.

One of them died later and the other struggling for his life, it was said.

The Police Public Relations Officer (PPRO), DSP Abiodun Wasiu confirmed the incident saying that the victims were given a mass burial close to the scene of the accident.

He said that the plate number of the bus was also burnt beyond recognition also but added that efforts are being made to trace the bus.

Related Topics:18 bus passengers burnt to death in Niger
Up Next