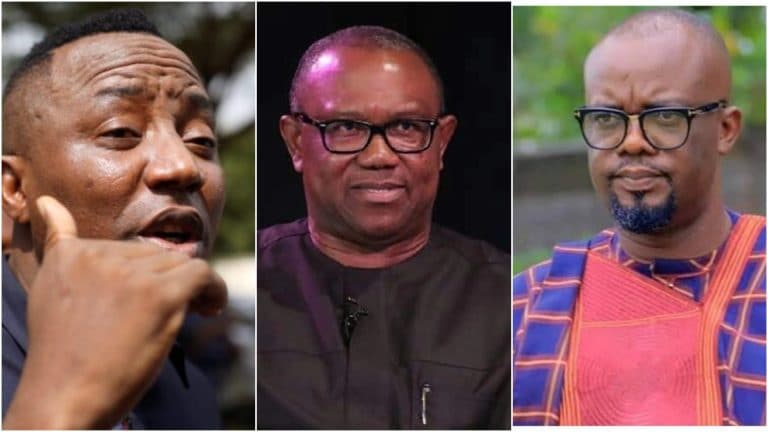 Nollywood actor Charles Inoji has berated Nigerian publisher, Omoyele Sowore over his statement on the former governor of Anambra and the presidential candidate of the Labour Party, Peter Obi.

Tracknews recalls that Sowore in a video shared on his social media page, said the Labour party has become an orphanage for homeless politicians, stating that it didn’t take long for Peter Obi to join the party.

He added that the Labour Party should not have someone like Peter Obi in its company recalling how the former Anambra State Governor managed workers’ strike for 13 months.

According to the publisher, Peter Obi left the opposition Peoples Democratic Party because they outplayed him with transactional politicking.

Reacting to the statement, actor Charles Inojie via Instragram berated the publisher for saying the former governor is a political orphan in the Labour party.

Charles slammed Sowore for exhibiting juvenile political exuberance , adding that it will be impossible for Nigerians to be attracted to his candidature.

He also nudged the 2023 presidential candidate to sell his programs without putting up an holier_than_thou attitude.

He wrote; “It’s so interesting how the Labour Party Presidential candidate in 2019 GOT 5,000 votes and you were ALLOCATED 33,000. Does your argument conform to rational reasoning if the same Peter Obi who in your analysis could not build good schools, hospitals or roads as governor is the same you are asking to come join you in AAC?

“I dare say that it is juvenile political exuberance, such as this that will make it impossible for serious minded Nigerians to be attracted to your candidature. It is very possible to sell your programmes to Nigerians without all this holier-than-thou self imposition.

“The point Nigerians have reached particularly as it concerns the 2023 elections is for the candidates to tell us why we should trust them with our votes without grandstanding. So far Peter Obi has been doing a lot of that and he’s been doing so creditably well.

“If it bothers anyone why a huge army of Nigerian youths are gravitating towards the Peter Obi Movement, it is because he is speaking the language of a new Nigeria. He is advancing a narrative that resonates with our collective vision of an egalitarian society that we love to see Nigeria become. It is the simple reason we have resolved to be OBIdient2023.”

Related Topics:2023: ActorCharles Inojie Berates Sowore Over Statement On Peter Obi
Up Next

Ekiti election will be historic – INEC