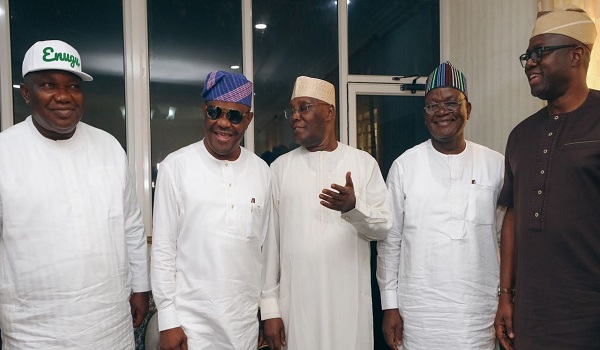 Alhaji Atiku Abubakar, the Peoples Democratic Party (PDP) Presidential Candidate, on Wednesday met with governors elected on the platform of the party to strategise on securing victory for PDP in the 2023 general elections.

The Chairman of PDP Governors Forum, Gov. Aminu Tambuwal of Sokoto State, told newsmen after the meeting on Wednesday in Abuja that it was more of consultative meeting.

“On behalf of my colleagues, the governors, let me commend the leadership of the party and members of our party for a very successful national convention.

“The national chairman along with the candidate came to thank the governors for their roles at the convention.

“We talked about cooperation and collaboration in prosecuting a very successful electioneering campaign that will result into victories for the PDP at various elections from the state House of Assembly, national election, governorship and the presidential election come February 2023.

“It is more of a consultative meeting on matters concerning the way forward,” Tambuwal said.

On the running mate to the party’s presidential candidate, Tambuwal said “it is part of the consultation, it is ongoing and governors are also being consulted on that,” Tambuwal said.

Related Topics:2023: AtikuPDP governors meet to strategise
Up Next