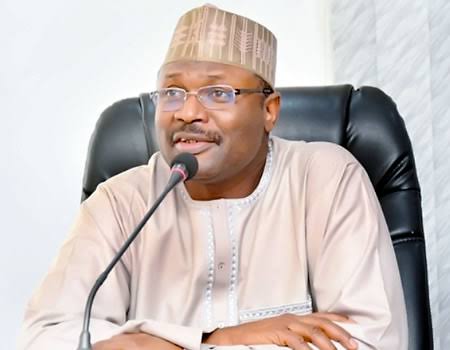 The Chairman of the Independent National Electoral Commission (INEC), Prof Mahmood Yakubu, has revealed that the body will heed to the order of the court to put an end to the ongoing Continuous Voter Registration on June 30.

TrackNews Nigeria learnt that Yakubu noted that the commission has a historical records of obeying the orders of the court of laws.

In a briefing ahead of the Youth Vote Mega Count Music Concert, Mr. Rotimi Oyekamni, the Chief Press Secretary to the Chairman announced this on Saturday.

Recall that a Federal High Court sitting in Abuja had issued an order stopping INEC from ending the ongoing voters’ registration exercise.

Our correspondent, Mohammed Oluwatimileyin Taoheed, covers that Justice Mobolaji Olajuwon had granted an order of interim injunction following the hearing of an argument on motion ex-parte by the Socio-Economic Rights and Accountability Project (SERAP) during the Court’s ruling.

Recall that INEC had stated that the voters’ registration exercise would end on Thursday, June 30, to allow the commission to free its database ahead of the general election scheduled to take place in 2023 as reported by Track News.

During the media brief , Yakubu added: “The commission has a history of complying with the court order, that I can assure you. I understand from the court papers that the commission was asked to come on the 29th of this month to give the court and submit certain documents.

“We are going to do that but remember that once a matter is in court, it is subjudice to talk about it.”

The Youth Vote Count Mega Music Concert is an event organised by INEC in partnership with Yiaga Africa and funded by the European Union.

Bello said the 150 staff of the commission will man several registration machines also deployed to the arena to capture data and biometrics of all eligible voters for the concert.

He said the commission was ready to ensure that all eligible voters who make it to the Mega Music concert are registered for the processing of their Permanent Voters’ Card (PVC).

Also speaking, Program Manager at EU, Olaolu Olawunmi explained that the Mega Music Concert is aimed at connecting young people to being more proactive to issues of governance.

Olawunmi commented that the concert is expected to aid cut a rise in the culture of the young people and make politics and governance captivating.

Noting that a similar event was held at the Tafawa Balewa Square in Lagos, Olawunmi the EU was encouraging the youth to not only register for their PVCs but also ensure they collect the cards when they are ready and head to the poll to vote with it.

He said: “The European Union has been a strong, major partner of the Nigerian government, particularly since the return to democracy in 1999. And we have quite an array of programmes in our development cooperation portfolio, and this is one of our flagship programmes.

“The program is fully funded by the European Union but the good thing about it is that it is locally driven and we are trying to bring civically-cultured celebrities, influencers, and bloggers; bring them together to help us speak to young people on how to get their PVCs.”

The show, which started on Monday, June 20 will end Saturday, June 25, with the Mega Music Concert featuring ample creatives.

Kizz Daniel, who will headline the show, MI, Teni the Entertainer, Tubaba, Falz, Patoranking, Mayorkun, Omawunmi and actors like Chioma Chukwuka, Mr Macaroni, KieKie are veteran celebrities who are to perform at the event.

Related Topics:2023 CVR: INEC To Follow Court's Order
Up Next