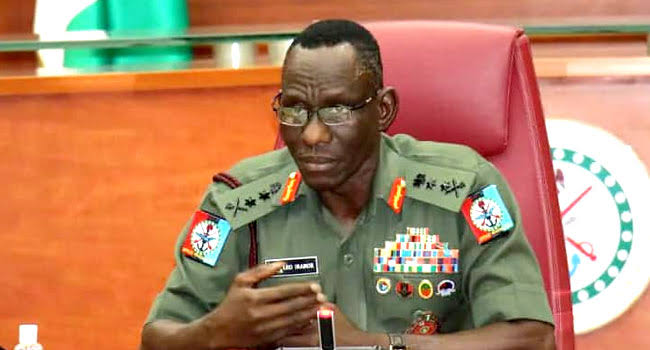 The Chief of Defence Staff (CDS), General Lucky Irabor, has warned politicians and their supporters who are planning to cause trouble during the 2023 general elections to desist.

Mr Irabor gave the warning while addressing reporters during the Defence Headquarters bi-weekly news briefing on Thursday in Abuja.

According to him, they will ensure a peaceful period in the coming elections so that every one of us will have a country we will be proud of.

The CDS advised those eyeing positions and appointments after elections to see themselves as men and women that conducted ourselves peacefully.

“For anyone who is looking forward to being elected, he must do it within the ambit of the provisions of the law because we will not in any way stand aside and see those who perpetrate violence all because they are looking for political office or appointive offices.

“And so, we will not allow criminals among those or if you like, thugs that might have made themselves available for anyone to use,” he said.

Mr Irabor, however, called on journalists and the public to continue to support the military and other security agencies in the quest to return peace to trouble spots in the country.

He urged the media to continue to educate Nigerians on the need to trust the military with actionable information in dealing with security challenges as issues of insecurity did not only rest with the military and other security agencies.

According to him, Nigeria belongs to every one of us and we have a duty to contribute in one way or the other in ensuring that criminals among us are exposed and dealt with.

Fielding questions from reporters, the CDS said availability of effective equipment for the troops in theatres of operations had been a major focus of the government.

He said the acquisition of fighting equipment was largely dependent on what was available in the market that had been assessed and adjudged to be effective, especially in dealing with Improvised Explosive Devices (IEDs) attacks.

According to him, IEDs attacks have remained the greatest challenge, especially for the operations in the North East over the years.

On moles within the troops, Mr Irabor said the military had a mechanism of identifying enemies within, adding that a number of culprits had been arrested and court martialed in different theatres at different times.

Related Topics:2023: Defence chief warns politicians against violence
Up Next