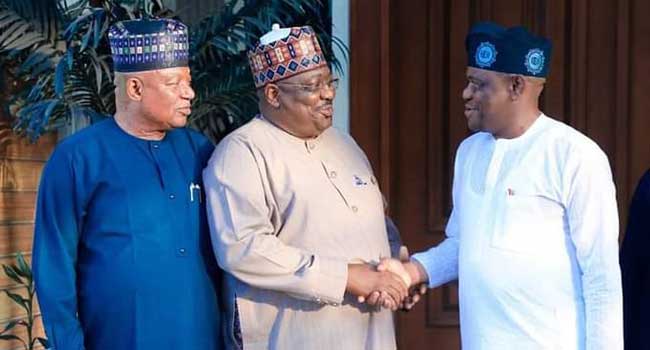 The lawmakers elected under the umbrella of the Peoples Democratic Party have paid a visit to Nyesom Wike, the Governor of Rivers State, on Thursday.

Recall that Wike has failed to break the silence over the coming general elections on and of his party after Atiku declared Mr. Okowa as his running mate.

Track News Nigeria gathered that this development has generated reactions from concerned Nigerians, they aver that the Wike who is a strong chieftain of the PDP might defect ahead of the 2023 race.

The visit is led Philip Aduda, the Senate Minority Leader, who took other lawmakers of the main opposition party to a closed-door meeting with Governor Wike.

Our correspondent, Mohammed Oluwatimileyin Taoheed, learnt that the senators arrived at the governor’s residence some few minutes past 3 pm and immediately went into the closed-door meeting with Governor Wike.

The meeting between the Rivers State Governor and the lawmakers lasted till about 6 pm.

Orubebe’s visit is coming days after he resigned his membership from PDP.