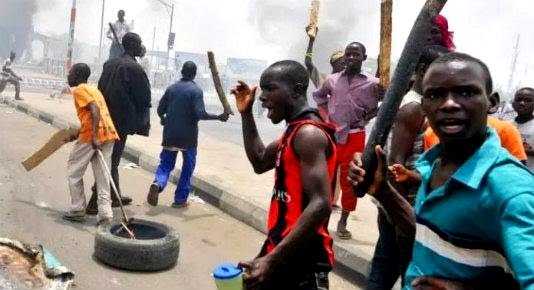 KANO___Youths under the auspices of Concerned of All Progressive Congress (APC) loyal to Kogi state governor, Yahaya Bello, have staged a peaceful protest in Kano to condemn the 11 Northern Governors over zoning the Presidential slot to the Southern part of the country.

The group said that the zoning of the party’s Presidential flagbearer to the South is a calculated attempt to deny Gov Bello’s chance of getting the slot because he is the best aspirant that could have won the party primary if allowed to contest the convention.

speaking with pressmen in Kano the group’s Coordinator, Nura Bebeji said “We are concerned APC youths in the North. We are out to express our displeasure over what we heard in the media on the unfortunate decision by the 11 governors to cede leadership to the South.”

In his statement, the decision by the governors is a deliberate plan to sideline youthful leaders from the north like Yahaya Bello, the Kogi state governor, from participating in the presidential contest.

The group said these Governors now have the guts to put heads together to support a southern candidate for the APC all because of personal interest.

He further added that any attempt by the governors to deny Nigerians their choice will certainly not augur well for the party in the upcoming 2023 election.

“If the party is interested in fulfilling the desires of a microscopic few over the desires of the majority, they should remember the loyalty they will expect at the polling units” he declared.

“These are governors who cannot take back one-third of the region that is under the control of miscreants, terrorists, bandits and kidnappers that include states like Kano, Zamfara, Sokoto, Katsina, Kaduna and others,” he said.

However, while commenting on the choice of Vice president Bebeji, warned that they will only accept he who has proven records and will address main issues of concern like unemployment, security and youth marginalization for the party to retain leadership in 2023.

Related Topics:2023/ Kano Youths Protest Against Shifting Presidency To South
Up Next