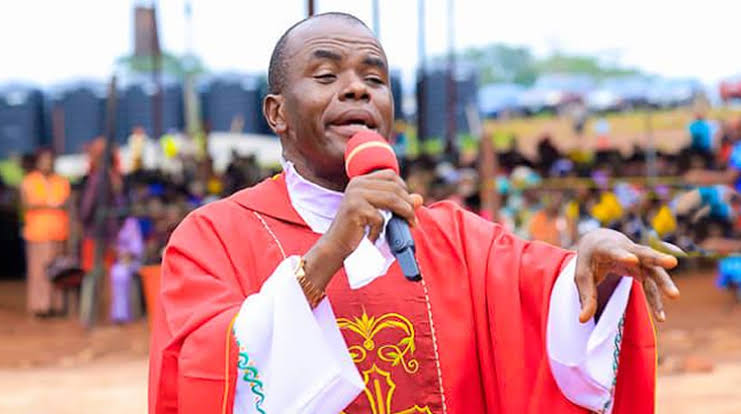 The Spiritual Director of the Adoration Ministry Enugu, Rev Father Ejike Mbaka, on Wednesday, said the former Governor of Anambra State, Peter Obi will not win the 2023 Presidential election.

The cleric stated this during a prayer service held at his prayer hall on Wednesday, June 15, 2022.

Obi is the presidential candidate of the Labour Party, who would be contesting against the likes of Atiku Abubakar of the Peoples Democratic Party, and Bola Tinubu of the All Progressives Congress.

Mbaka while addressing his members said Obi would not become the president of Nigeria in 2023 because he lacks the spirit of generosity.

The cleric said, “It is better to have a president who is a gifted old man than a young man with ‘gum’ hands.”

He further stated that the former Vice President, Atiku has shown that he is ready to run for office because he is not running alongside Obi in 2023.

According to Mbaka, Obi will only win the forthcoming presidential election if he decides to kneel on the Adoration altar.

The cleric added, “Peter Obi has a mouthful, he has nowhere to go unless he kneels on the Adoration altar.”

He accused the presidential candidate of the Labour Party of insulting the holy spirit.

Mbaka claimed that he helped Peter Obi return to the governorship in Anambra State, “but he did not come to thank God”.

“Who doesn’t spend his money eating what you want to support? Do you want people to starve?”

“If he becomes president, he will close our ministry.”

“If Igbo people are looking for a representative in Nigeria, they are not the kind of person Peter Obi is.”

“Whoever refuses to donate to the church should be the president?”

He went on to say that this was how Peter Obi left the APGA and joined the PDP, despite all the support that Odumegwu Ojukwu had given him to become governor.

Mbaka said, “I (Peter Obi) started with Ojukwu, in the middle of the night you released Ojukwu, released Igbo is Igbo, released APGA, joined the PDP.

“He has now defected to the Labor Party, and his pregnancy is over.”

“You know that there is nothing that students hate about ‘labour, everyone supports labour

“If he takes this position from APGA, we know he has people to replace him.”

Related Topics:2023: ‘Peter Obi Will Not Be Nigeria’s Next President’ – Fr Mbaka
Up Next

UNICEF, others to ensure financial discipline in Bayelsa PHCs

Police Uncover Hotel Where Teenagers Are Used As S3x Slaves