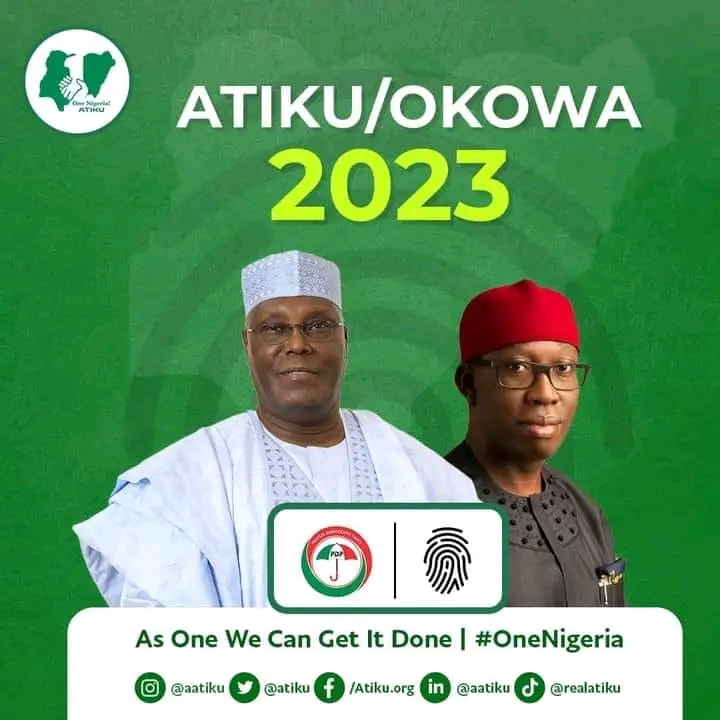 The campaign poster of Atiku Abubakar as the Presidential candidate of the Peoples Democratic Party (PDP) and Governor Ifeanyi Okowa of Delta State as his running mate has surfaced online.

The poster, which shows the former Vice President and Governor of Delta State beaming with a smile, is titled Atiku/Okowa 2023.

Other texts on the poster include a slogan (As One We Can Get It Done) a hashtag (#OneNigeria) and some social media handles.

The campaign poster was shared by Atiku alongside a caption via his verified Twitter handle on Thursday afternoon.

Tracknews had earlier reported that Atiku had officially announced Okowa as his running mate for the 2023 general elections.

Atiku announced Okowa as his running mate at the party’s National Secretariat after the Delta governor was screened and cleared by a Screening Committee on Thursday.

Speaking at the unveiling ceremony, Atiku revealed that he chose Okowa because he has the qualities to be the President and has an appreciation of the deep rot in which the country has been put into.

The PDP Presidential candidate added that he chose Okowa because he is dedicated, trustworthy, and reliable and would support him wholeheartedly to steer the country to greater heights.

Atiku also said he is hopeful that Okowa would help him and the party regain power in the 2023 presidential election and eject the APC from Aso Rock.

Related Topics:2023 Presidency: Campaign Poster Of Atiku-Okowa Emerges
Up Next