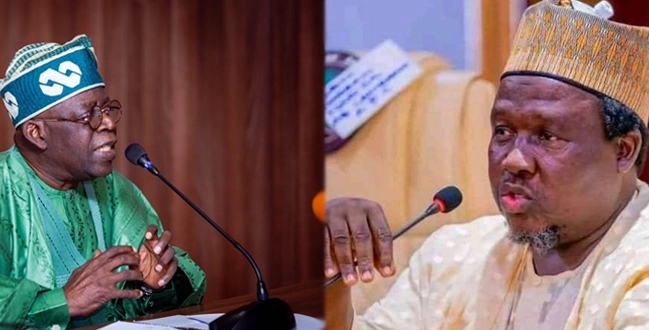 A chieftain of the ruling All Progressives Congress (APC), Kabiru Faskari on Friday disclosed the identity of the person included as running mate in the nomination form submitted to the Independent National Electoral Commission (INEC) by the party’s presidential candidate, Bola Tinubu.

According to the disclosure by Faskari, Tinubu submitted the name of Kabiru Masari from Katsina State in the form submitted to INEC.

Tracknews reports this was disclosed during an interview with Channels TV.

Faskari stressed that the inclusion of Masari as Tinubu’s running mate amidst the clamour against a Muslim-Muslim ticket does not violate the provisions of the country’s constitution.

Tracknews however understands that Masari is on the form as a ‘placeholder’ to beat the June 17 deadline set by INEC pending when a substantive Vice Presidential candidate will be unveiled.

Masari hails from Kafur Local Government Area of Katsina State and is a kinsman of the Katsina State Governor, Aminu Bello Masari.

He served as the National Welfare Secretary of the APC under the leadership of Adams Oshiomhole as National Chairman.

He was a member of the main opposition party, the Peoples Democratic Party in the era of late President Umaru Musa YarÁdua but defected to the Congress for Progressives Change (CPC) after the death of Yar’adua and joined the ruling party after the structure of CPC collapsed into APC in 2014.

Earlier on Friday, Tinubu confirmed he has submitted his presidential nomination forms to the Independent National Electoral Commission (INEC).

He disclosed that he submitted his nomination forms to INEC on Wednesday, June 15.

“As stipulated by the electoral law and INEC guidelines and timetable, the standard-bearer of the All Progressives Congress, HE Asíwájú Bola Tinubu, has returned his duly completed nomination forms to INEC,” a statement issued on Friday from the Tinubu Media Office by Tunde Rahman read.

The statement added: “The forms were returned on Wednesday, June 15, two days ahead of schedule.”