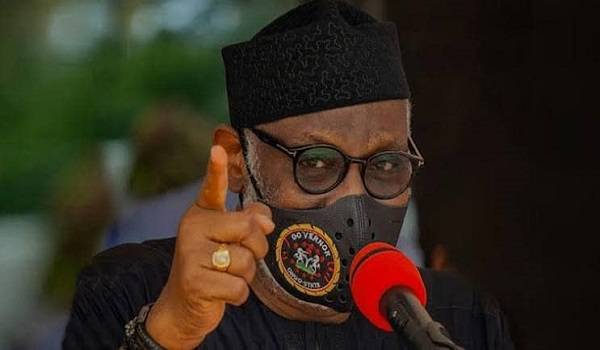 Akeredolu said he took the conclusion with a pinch of salt.

He stated that ISWAP always take responsibility for any attack it carries out.

Speaking on Friday during an interaction with a Swiss-based Christian human rights Organisation, Christian Solidarity International (CSI), the Ondo Governor said the Southwest region has been a peace haven before the attack.

According to him: ”The statement is too hasty. I take their conclusion with a pinch of salt. ISWAP don’t hide their attacks. If they have done it, they would have owned up. We are yet to know their identity and our security people are still on their trail.

“We are helping the victims of the attack. Including those who lost their loved ones and those who are in the hospitals. We have also have people who have offered the state government some assistance. Some people have donated to the Catholic.”

On State police, the Governor said: “A single police command can not guarantee safety in this country. We must have state police now. Amotekun suffers a lot of limitation in getting all the equipment needed to fight these criminals.”

The Governor described the international community reactions to the killings in Owo as unprecedented.

Related Topics:Akeredolu faults FG for Iinking Owo terror attack to ISWAP
Up Next