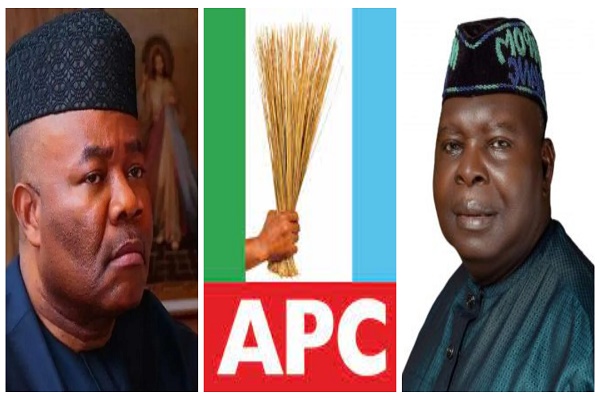 Akpabio and Ekpoudom, who are laying claim to the senatorial ticket of the area, exchanged bitter words at the weekend.
While Ekpoudom dismissed Akpabio’s claim as ‘product of a sham primary,’ the former Niger Delta Affairs Minister said the primary that produced Ekpoudom was ‘illegal’.
The primary conducted by a faction of the APC at the Government Primary School Ikot Ekpene on May 27 produced Ekpoudom as winner of the Akwa Ibom Northwest senatorial ticket.
After surrendering his presidential bid, Akpabio was last Thursday nominated as senatorial candidate of the APC for the area at the primary endorsed by the Stephen Ntukekpo-led leadership of the party in the State.
In a statement by Director General of campaign, Uwem Udoma, Secretary, Obong Godwin Etokakpan and the campaign’s Director of Media and Publicity, Peter Idiong, Ekpoudom assured APC members in the senatorial district he will “under no circumstance, relinquish, withdraw or be substituted no matter the degree of pressure and inducement dangled by anyone”.

He vowed he will under no circumstance relinquish the ticket to Akpabio, matter the degree of financial inducement.

The statement read in parts: “The 2023 DIG Udom Udo Ekpoudom (Rtd), Senatorial Campaign Organization has observed an absurd, ridiculous and highly provocative conspiracy with respect to the APC Akwa Ibom North West Senatorial District Senate Primary election, validly won by Udom Udo Ekpoudom. We vehemently wish to reiterate and state as follows;
“Recall that Ekpoudom duly participated in the Akwa Ibom North West APC Senatorial District Primary Election held on Friday, May 27, 2022, in line with the 2023 Election Timetable and Guideline of our Party.
“The purported “scam election” held on Thursday, 8th June, 2022 at the Skills Acquisition Centre in Ikot Ekpene is nothing but illegal, deceitful, unconstitutional, and legally defective”, DIG Ekpoudom declared.
But speaking through his media aide, Jackson Udom, Akpabio insisted the primary that produced Ekpoudom is illegal and not recognised by the State and national leadership of the APC.
“Ekpoudom cannot claim he is the candidate of the APC for Akwa Ibom Northwest. Ask him which faction he belongs to. Was the primary that purportedly produced him that of Stephen Ntukekpo led leadership of the party? If not so then the exercise he participated in is illegal,” he said.