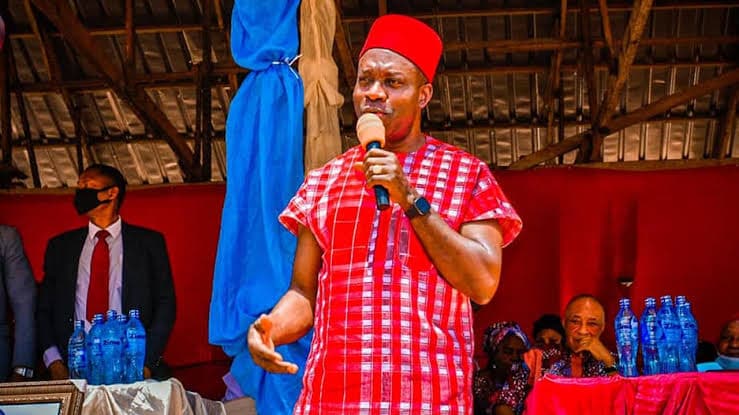 Tracknews reports that Rev Father Ebube Muonso, in a viral video addressing his congregation, had claimed that Fulani herdsmen with tribal marks would invade the state’s Government House and that he saw Soludo running out in pool of blood.

He said there is need to pray for Anambra and Soludo, urging the governor should also pray for himself.

Reacting in a statement he personally signed on Tuesday, Soludo asked the priest to keep his prophecies to himself as he doesn’t believe the prophecy.

He stated that only God can dictate what happens to him, adding that the cleric could have called him personally and relay his message to him since the priest has his number.

Soludo said: “On your prophecy, you’re certainly entitled to claim that you “saw” anything, and to call for prayers. I need all the prayers in the world and I believe that thousands of people of goodwill are praying for us and for Anambra.

“No man has a say regarding his plan for my life. I do not believe these political or phantom “prophecies” designed to play to the gallery. That is not my upbringing and faith as a Catholic. You’ve my contact and assuming that anything was “revealed” to you as a threat to my life, do you really believe that the best way to communicate it’s on your pulpit?

“By the way, God didn’t “reveal” to you the attack by unknown gunmen on me last year at a rally, killing three policemen; nor has he “revealed” to you any of the dozens of the attacks on innocent people this year so that the people may take caution or pray.”

Soludo added, “Funny enough, these “pulpit prophecies” are always about high public officials. I’ve lived my life to this age without needing or relying on “prophecies”, and it’s too late now to change. My prayer is simply: “Let your will be done”.

“So please, if you’ve further “revelations” just pray about them or keep them to yourself. I do not want to know because the God in heaven that I serve is totally in charge of my life!”