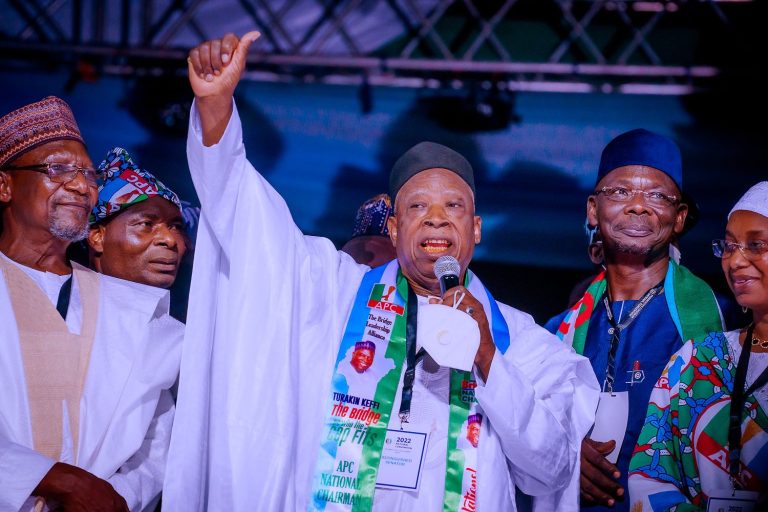 Governors of the ruling All Progressives Congress (APC) have trailed the party’s National Chairman, Abdullahi Adamu to his residence to find a lasting solution to the confusion trailing the party’s special convention where its 2023 presidential candidate is expected to emerge.

It will be recalled that Tracknews earlier reported that Senator Adamu had reportedly gone incognito after unilaterally declaring Senate President Ahmad Lawan as the party consensus presidential candidate on Monday.

It was gathered that crisis is brewing in the leadership of the APC after the party’s chairman claimed Buhari had anointed Lawan get the ticket, a claim that was later denied by the presidency.

The announcement was also denied by the National Working Committee (NWC) of the party as well as the Northern Governors elected on the APC platform.

According to reports, despite activities being in top gear ahead of the National Convention of the APC, Abdullahi Adamu’s whereabouts have been largely unknown.

But a video posted on the micro-blogging platform, Twitter on Tuesday morning by a known loyalist of Asiwaju Bola Tinubu and Senior Special Assistant (SSA) to the Governor of Lagos State, Babajide Sanwo-Olu on New Media, Jubril Gawat revealed that the APC Governors trailed Adamu to his residence.

He tagged the video with the caption; “Alaye Idamu ….. Sorry ADAMU Japa for Secretariat …. A Lo Ka mole … We go hook am for house …. You think we are joking here ni Baba.”

Related Topics:APC Governors Storm Adamu’s House After He ‘Escaped’ From National Secretariat (Video)
Up Next