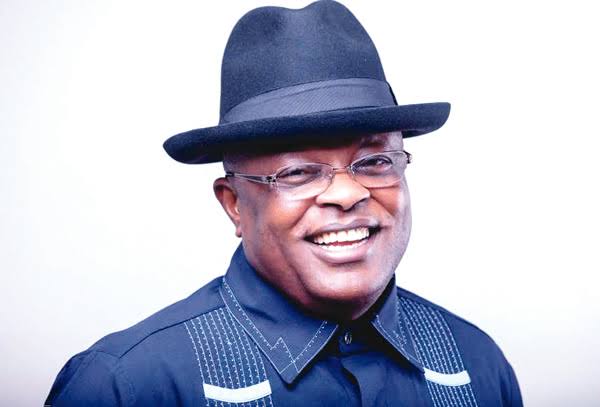 Ebonyi Governor David Umahi has denied reports that he has withdrawn from the All Progressive Congress (APC) pesidential primary.

The Governor stated this in two separate reactions from His Media Aides, Uchenna Orji and Francis Nwaze.

He was reacting to reports that he stepped down for Senate President, Ahmed Lawan.

Both are presidential aspirants of the APC

Umahi posted pictures of the visit on his verified social media handles.

“It was a pleasure to welcome my brother, friend and the President of the Senate, Senator Ahmad Lawan with his entourage made of six senators to my Abuja residence a while ago.

“We had brotherly discussions on national unity and our aspirations,” Umahi wrote

But last night, some sections of the media reported that the Governor had stepped down for Lawan.

But Orji and Nwazs denied the reports.

Orji, Ebonyi Commissioner for Information, in a statement on behalf of the David Umahi Campaign Organisation, described the report as fake news.

He enjoined members of the public to disregard the fake news describing it as a cheap blackmail and absolute falsehood by desperate politicians who are apprehensive of the acceptable political profile of the Governor whose track records have endeared him to heart of the APC leadership.

“We are suprised that Arise TV could descend so low as to take such a dirty job of running Aspirants down for needless gratifications”.

‘We urge Arise TV to immediately purge itself of this wanting behaviour by stating the obvious that Governor David Nweze Umahi,APC Presidential Aspirant never stepped down, ” Orji said

Nwaze, who is Umahi’s Special Assistant on Media, said the report is totally false in context and content.

“This raises a question mark about the credibility of the source of such fallacy, what never took place which is capable of putting Governor Umahi’s aspiration in jeopardy”

He said the Senate President’s visit was a last-ditch effort to ramp up partnership ahead of the APC presidential primary.

Nwaze reiterated that Umahi and Lawan promised to support whoever amongst the two and other aspirants that emerge as the flagbearer from the primary.

“The Senate President even took out time to eulogize Engineer Umahi for making the Party proud through his purposeful governance in Ebonyi State.

“There was no time during the visit that the issue of stepping down by either Governor Umahi or the Senate President was discussed or even suggested”, he said.

Nwaze expressed serious concern how Arise Television got themselves enmeshed in such professional miscarriage of reality without verifying the authenticity or otherwise of their news source.

“The teeming supporters of Engineer Umahi across Nigeria and beyond are encouraged to disregard the ill-fated news item which is by all standards fake, and go about their solidarity on the assurance that His Excellency the Governor is still very much in the race to develop Nigeria, God willing, he will emerge in the Presidential Primary of our great Party, the All Progressives Congress,” he said.

The APC presidential primary holds from June 6th to June 8 2023 in Abuja.

Related Topics:APC presidential primary: Umahi denies stepping down for Lawan
Up Next