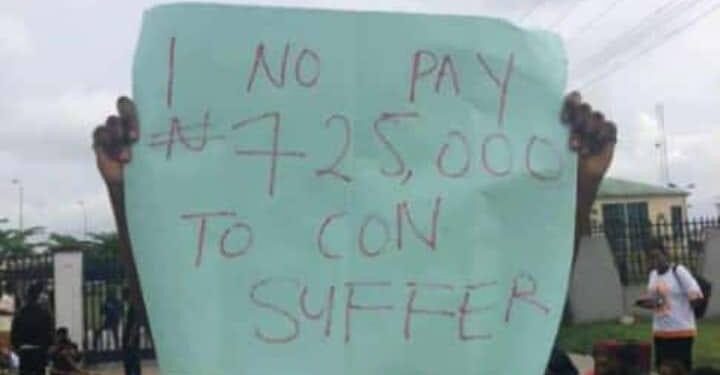 Students of the Bayelsa Medical University (BMU), Yenagoa, Bayelsa State capital took to the Imgbi road where the school is located over the weekend to protest poor condition of living, non- accreditation of medicine as a course, lack of a Students Union Government among other unresolved issues with the management of the University.

The students barricade the main entrance to the school chanting solidarity songs and armed with placards with inscription such as ‘ I no pay N725,000 to con suffer’, ‘ Where is the 500M that Wike gave us,’ ‘ No more poor accommodation, No More poor security’ ‘ No more suffering in silence’ and ‘ BMU stop deceiving our parents’ to press home their demands which include restoration of power supply to the school.

The students were unanimous in their criticism of the management of the school over what they called the lackadaisical attitude of the management get Medicine as a course accredited in the school, which they perceived could thwart their aspiration of joining the school.

Some of the 300 level students namely Austine Ebinabi Emmanuel, Etuoma Abraham and Omatsola Jennifer, lamented that despite the assurance given by the school to accredit the course before their 300 level, they are yet to see any headway.

Other students, Emi Robinson and Fawei Lawrence calling for the formation of a Students Union Government in the school among other issues, noting that efforts to amicably engage the school management to get power supply restored to the school has been futile.

in the past on the issues, have are all proven abortive.

The Commissioner for Education in the state, Dr. Gentle E. Emelah waded into the issue and directed members of the Bayelsa State Students Management Committee (SMC) to intervene and subsequently bring some of the students to the dialogue table.

At the meeting with some of the protesting students joined by the management of the University led by the Vice Chancellor, Prof. Etebu Ebitimitula the raging issues were brought to the fore

Emmanuel who spoke on behalf of the students who raised the various issues decried that lack of constant power supply has affected their academic pursuit emphasizing that as medical students they are required to study without any form of interruption.

He also pointed out that some of the students are yet to migrate to Medicine which remains the course they initially wanted to study.

College of Education teachers begin four-week warning strike over neglect of institutions, others