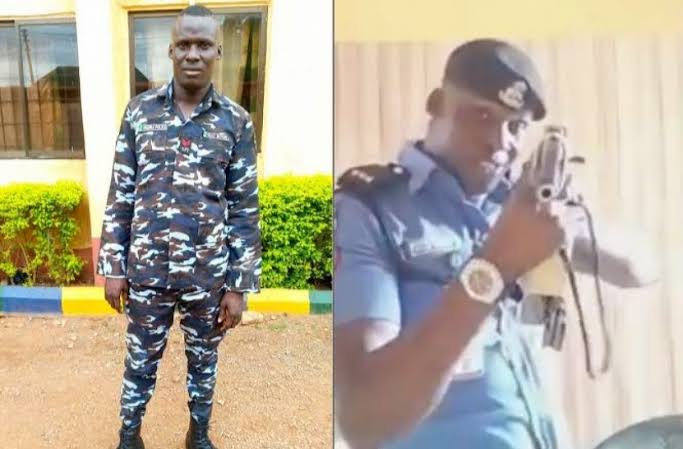 The controversial police officer caught in a viral TikTok video singing and dancing to a cult song, Isaac Mathew, has been demoted from the rank of corporal to constable.

Force Public Relations Officer, CSP Olumuyiwa Adejobi, made this known in a statement on Sunday.

He maintained that the demotion was necessitated by the result of an orderly room trial of the offender and a a re-assessment of the recommended punitive measures for the offences of discreditable conduct, promoting secret cults as well as the violation of the social media policy of Nigeria Police Force.

You will recall that Mathew, an officer attached to the Ebonyi Police Command, was in a viral Tiktok video on May 7 dressed in full police uniform, singing, dancing and parading an AK-47 rifle in praise of a secret confraternity.

Muyiwa said other disciplinary cases of unprofessional conduct by officers in encounters with members of the public are also being looked into in line with the current police administration’s goal of ensuring a transparent, accountable, and proactive policing system in Nigeria.
According to him, the Inspector General of Police (IGP) Usman Baba, has charged all police officers to uphold professional ethics, discipline, and the ideals of the Force.

Related Topics:Cultism: Officer In Viral TikTok Video Punished With Demotion
Up Next