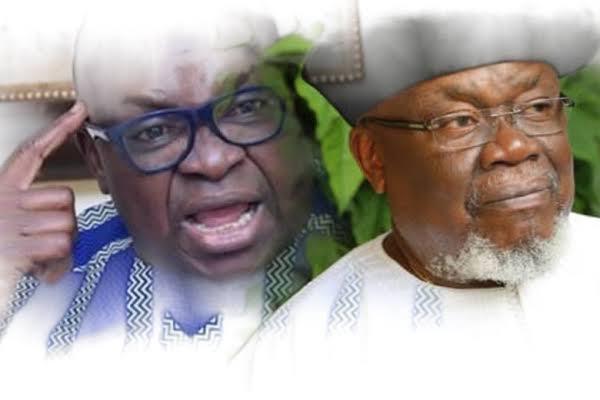 A past Governor of Ekiti State, Ayodele Fayose, has berated Chief Tom Ikimi, a former Minister of Foreign Affairs, over his comments on the recent governorship election in the State.

Recall that Ikimi had earlier blamed Fayose for allowing the party to lose the guber election in Ekiti. He urged that appropriate sanctions and disciplinary actions be meted out on Fayose.

He said: “Our problem in Ekiti today has been caused by the past Governor Fayose. He ruined the place before he left office… The build up to the choice of a candidate in Ekiti was a big struggle.

“All kinds of meetings were held until they had to push Segun Oni who went to SDP that was not known there. There was no campaign council for Ekiti, no rallies there. Nothing happened there.

“The party at the national level must address this matter… if people should misbehave, there should be disciplinary actions. If that is not done, then it is a waste of time, we have a big battle ahead.”

In a bitter reactions to the claims, Fayose commented that the PDP did not win the Ekiti election due to many factors.

As gathered by Track News Nigeria in many a tweet, Fayose writes: “Age they say comes with decorum and maturity not only grey hairs. It appears that reverse is the case with Chief Tom Ikimi, who is ranting on matters of Ekiti. Apart from being Chairman of NRC, a party he led to electoral defeat in 1993, has he ever contested or won a state election?

“If this latest vituperation of Ikimi is a fallout of my support for Gov Wike during the PDP presidential primary, then he should match his age with numbers and recall that this same Fayose gave PDP 16/0 over APC in 2014 and defeated Niyi Adebayo, an incumbent governor in 2003.

“He should also be reasonable enough to understand that the same PDP that lost election in Ekiti on Saturday to various factors, had in the past, won elections and will still win elections in future.

“To this end, if Ikimi is seeking relevance with Atiku, he should do same more decently. He should allow the sleeping dog to lie and save the PDP from unnecessary shootouts and fireworks at this time as we approach the general elections.”

EDO: ‘Obedient’ Is Now A Name For All” – Obaseki