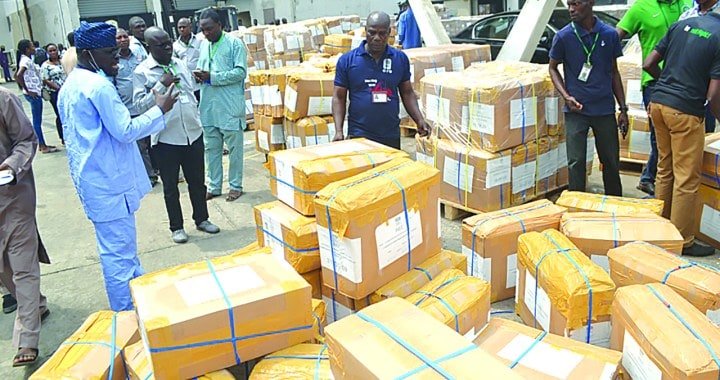 The Independent National Electoral Commission (INEC) has commenced the distribution of sensitive materials across Ekiti State area councils ahead of the Saturday gubernatorial polls in the state.

Tracknews understands that electoral officers for the 16 local government areas of the state were escorted by security agents on Thursday for safe delivery of the sensitive materials as electorates anticipate the commencement of the polls to elect another leader.

The materials were distributed at the INEC state office in Ado-Ekiti in the presence of journalists and party representatives.

The Resident Electoral Commissioner, Dr Adeniran Tella while conversing with journalists, said the electoral officers are expected to arrive early at their designated councils on time so they can be sent to assigned polling units before Saturday morning.

He expressed the hope that there would be no late arrival of materials to polling units on Saturday. Dr Tella explained that the ballot papers were colour-coded for each local government in order to prevent electoral fraud.

He also noted that the result sheets were also customized according to the polling units.

Some of the party agents including Mr Kayode Babade of the APC, Mr Kehinde Adeniyi of the ADC and IPAC Chairman in Ekiti State, Mr Ifedayo Iyaniwura lauded INEC for the transparent manner in which the materials were distributed.

Related Topics:Ekiti 2022: INEC Begin Distribution Of Sensitive Materials To Area Councils
Up Next