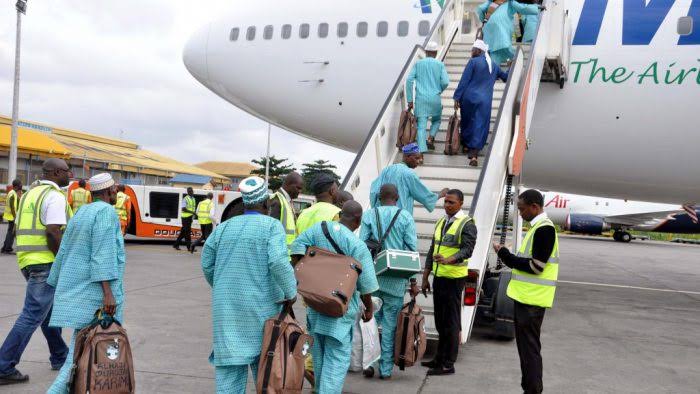 The first batch of 560 intending pilgrims from Kwara State yesterday left for the Kingdom of Saudi Arabia from the Ilorin International Airport.

According to the News Agency of Nigeria (NAN), the pilgrims departed the airport aboard Max Airline aircraft at about 5:40am in the presence of relations and well-wishers.

The departure was also witnessed by Dr Awwal lbrahim, 2022 KWARA Amirul Hajj and Executive Secretary of the state Muslim Pilgrims Welfare Board.

Ibrahim in a chat before their departure, charged them to be good ambassadors of the state and Nigeria while in the holy land.

He appealed to the intending pilgrims to pray for the restoration of peace in the state and the country at large while performing the pilgrimage.

The Amirul-Hajj said the successful take-off of the inaugural flight was due to the efforts of Governor AbdulRahman AbdulRasaq and prayed to Allah to continue to guide him to pilot the affairs of the state to greater heights.

He attributed the delay in the transportation of pilgrims to the late outcome of PCR test results, adding that every intending pilgrim must go for the test 72 hours before the journey.

Ibrahim disclosed that 1,500 intending pilgrims from the state would perform the 2022 Hajj with the board.

One of the intending pilgrims, Mr Yemi Lawal Rabana, lauded the arrangement put in place by the state board.

He expressed optimism that the trip would be hitch-free and attributed their delay at the airport to some logistical issues.

Another intending pilgrim, Mosurat Yusuf, said the board was able to make the facility conducive for them despite some of the challenges it encountered.

Related Topics:Hajj: First batch of 560 Kwara pilgrims leave for Saudi Arabia
Up Next