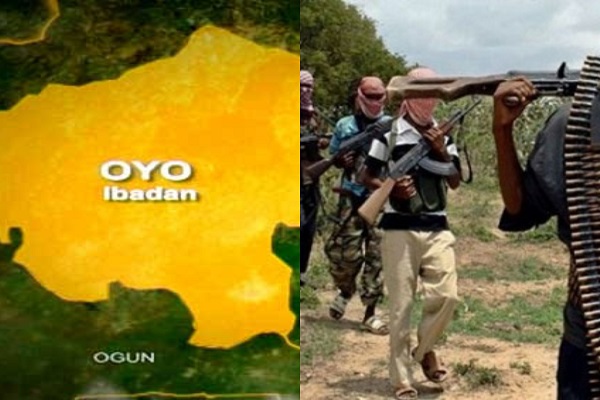 They were abducted on Sunday around 8:30p. at an isolated area along New Oyo/Ogbomoso Expressway.

Oyo Police spokesperson, Adewale Osifeso, a Superintendent of Police, said the report of the abduction was lodged by one Rev Adekunle Adeluwa at the Atiba Divisional Police headquarters, Oyo.

Osifeso however said the Command has initiated an intensive manhunt for their abductors.

Narrating how the abduction allegedly took place, the Police spokesperson in a statement said preliminary investigations revealed that the victim’s vehicle developed what seemed a mechanical fault while traveling from Yewa, Ogun State to Jebba, Kwara State en route an isolated area along New Oyo/Ogbomoso Expressway.

It was gathered the suspected abductors could have taken advantage of the issue with the vehicle to carry out the nefarious activity.

A source hinted the abductors have demanded a ransom of N50m.

The source hinted that a former Vice Chancellor of the Ajayi Crowther University, Professor Dapo Asaju was contacted by the abductors but the claims could not be confirmed as of the time of filling this report.

No official statement has also been released on the development by the Church too.

Osifeso statement reads: “On Sunday 12/06/2022 at about 2100HRS, One Rev. Adekunle Adeluwa reported to the Command through an incidented report at Atiba Divisional Police Headquarters, Oyo town that at about 2030HRS, One Bishop Rt. Rev Aderogba of Jebba Diocese, Kwara State in the Company of his Wife and driver were abducted.

“The Deputy Commissioner of Police in charge of Operations of the Command is in Charge of the rescue operation that has commenced since 2100HRS of Sunday 12/06/2022.

“All the tactical teams of the Command Anti-Kidnapping squad, Ambush Squad, Puff Adder, Police Mobile Force (PMF), Counter Terrorism Unit (CTU) and Conventional Police personnel along with local hunters and vigilantes are all involved in the rescue operations.

“Meanwhile discreet investigation led by the State Criminal Investigation Department (SCID) is simultaneously been vigorously embarked upon to ensure that the victims are rescued unhurt.

“While enjoining members of the public to report any suspicion to the nearest Police Division or formation, credible and timely information, the General Public are assured of their safety as the go about their lawful activities.”