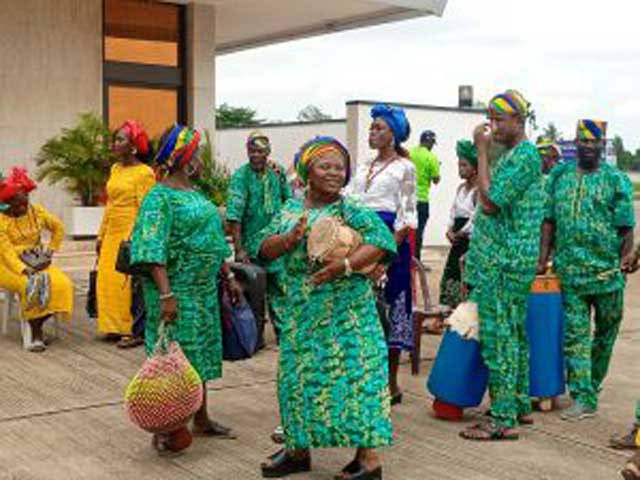 The News Agency of Nigeria (NAN) reports that Tinubu, a former governor of Lagos State, is returning to his home state for the first time, after he clinched the APC presidential ticket.

NAN recalls that Tinubu defeated 13 other aspirants, including Vice President Yemi Osinbajo, to clinch the APC ticket for the 2023 presidential election.

Tinubu, one of the national leaders of the ruling party, polled 1,271 votes to defeat his closest rival, former Minister of Transportation, Mr Rotimi Amaechi who got 316 votes at the party’ s Special National Convention held from June 6 to 8 in Abuja.

Meanwhile thousands of APC loyalists trooped out and gathered in various groups in and around the airport to receive their leader.

Traditional singers and dancers were at the airport entertaining the people while awaiting for Tinubu.

The supporters were seen displaying unique cultural heritage of Lagos such as Eyo Masquerade and other masquerades among others.

Meanwhile, Tinubu had after winning the presidential ticket, paid visits to most of the aspirants who contested against him at the primary election to solicit their support in his quest to succeed President Muhammadu Buhari in 2023.

Some aspirants had donated their campaign offices for the Asiwaju Bola Ahmed Tinubu (ABAT) campaign in the course of visiting them to ensure that the party remained united after the primaries.

Tinubu will be slugging it out in 2023 with other presidential candidates from the Peoples Democratic Party (PDP) -Alhaji Atiku Abubakar; Labour Party -Ex Gov. Peter Obi of Anambra; New Nigeria Peoples Party (NNPP) -Sen. Rabiu Kwakwanso among others.

Related Topics:Massive crowd storms MM Airport in Lagos to receive Tinubu
Up Next