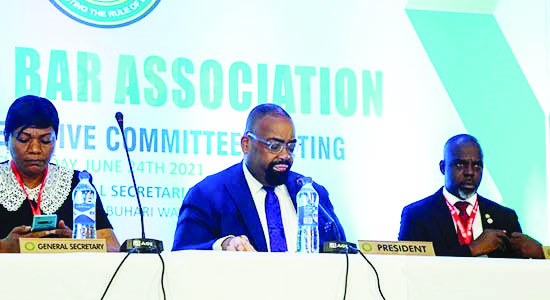 The National Executive Council of the Nigerian Bar Association (NBA-NEC) has created three more branches of the association.

Two of the branches are in Abuja, while the third branch is in Lagos.

The new Abuja branches are the Garki Branch and Nyanya/Karu Branch.The new Lagos branch is the Surulere Branch.

The NBA’s NEC stated this at its quarterly meeting in Ilorin, the Kwara State capital, which was held on June 8 and 9.

NBA President Olumide Akpata further explained that the Garki Branch was created to solve the ‘lingering crisis’ in the NBA Abuja Branch.

He noted that the Nyanya Branch and Surulere Branch were created out of the two mega cities’ Abuja and Lagos branches for easy administration as a result of the large population of lawyers.

The new branches come ahead of the NBA’s 2022 election which holds on July 16 and Annual General Conference (AGC) 2022.

The NBA NEC also disclosed that it had approved literary icon Chimamanda Adichie as its keynote speaker for the 2022 AGC.

It added that it had retained the conference fees for 2021. Thus, Young Lawyers will pay N15,000 or N7,500 for physical or virtual attendance of the AGC, while late registration fee is N45,000.

The NBA NEC also responded to allegations of unfair treatment of Muslim lawyers and Muslim affairs, raised by the Muslim Lawyers Association of Nigeria (MULAN), particularly concerning the May 12 lynching of Deborah Samuel, a student of the Shehu Shagari College of Education, Sokoto State.

Miss Samuel, a 200-Level Home Economics student, was gruesomely murdered and her corpse set ablaze allegedly by her co-students at the college for alleged blasphemy.

MULAN, in a statement, criticised the NBA’s stance on the incident and its decision to postpone indefinitely its Section on Public Interest and Development Law (SPIDEL) Conference scheduled for Sokoto between May 22 and 26 on account of the murder.

But responding to MULAN, the NBA NEC stated that condemning Deborah for blasphemy when she was never tried by a court and found guilty, negated the presumption of innocence that lawyers preach.

500 for training on road safety