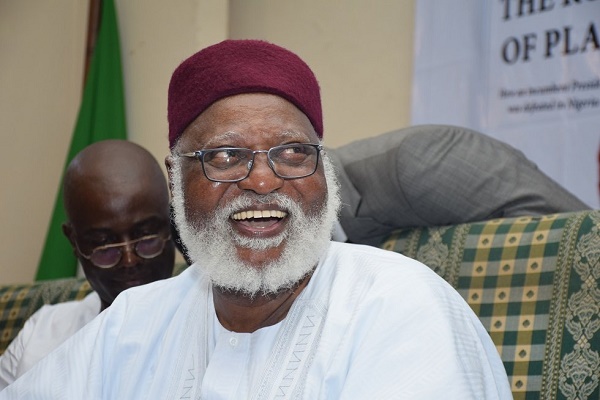 Abdusalami is a member of the 41st Regular Course of the NDA.

The group gave the commendation while celebrating the ex-military leader, who turned 80 on Monday.

The Officers described the former Head of the State as a fine gentleman officer, describing him as an “accomplished General and seasoned Statesman of repute”.

In a statement by President and Publicity Secretary Lancelot Anyanya and Faruq Baba-Inna respectively, the association stated that the continued existence of the organization was traceable to the commitment of Abudusalami and other officers.

According to them, the 33-year existence of the organisation as an Alumni association was due to the excellent work done by the then Brigadier Abdulsalami Abubakar and other very fine senior officers, when he chaired the Armed Forces Selection Board for 41 Regular Course.

The statement further added it was by divine providence that Major General Abdulsalami Abubakar became the Chief of Defence Staff (CDS) to preside over the convocation and formal commissioning ceremonies as officers of the Nigerian Armed Forces on behalf of the then Head of State, Commander in Chief.

It added: “The senior citizen, Abudusalami Abubakar through the providential circumstances, rose to become the nation’s Commander in Chief.

“It was while he was spearheading the nation’s military as the Commander In-Chief that he bequeathed to the nation the country’s current democratic dispensation”.

The statement stressed: “it was an obvious fact that the hand of the Almighty has been at work in the life of the Association to make history individually and collectively as a Course, adding that the Association is blessed to be connected to the iconic personality of Abubakar, who the Association views as it’s father.

“The Nigerian Defence Academy (NDA) 41st Regular Course Alumni Association warmly and heartily felicitates with a fine Gentleman Officer of the finest cut, Accomplished General and Seasoned Statesman on the auspicious occasion of his 80th Birthday on 13th June 2022.

“We note that the basis of our connection and continuing relationship as an Alumni Association is traceable to the excellent work done by the then Brigadier Abdulsalami Abubakar and other very fine senior officers, as Chairman of the Armed Forces Selection Board for 41 Regular Course about this time 33years ago.

“By divine providence, Major General Abdulsalami Abubakar as Chief of Defence Staff (CDS) presided over our convocation and formal commissioning ceremonies as officers of the Nigerian Armed Forces on behalf of the then Head of State, Commander in Chief.

“The senior citizen in providential circumstances became our Commander in Chief, from which service platform our country’s current democratic dispensation was birth.

“Clearly the hand of the Almighty has been at work to make our history individually and collectively as a Course, intrinsically connected to this iconic personality who the Association views as it’s father.

“It is against this background that the 41RC Alumni Association, United in Friendship for Progress, salutes His Excellency, General Abdulsalami Abubakar, GCFR on this day of the anniversary of his birth, with best wishes for excellent health.

“It is also our prayer that his stellar legacy of public service and peace building will continue to benefit our country through his wise counsel and by our own continuing commitment to national duty in and out of active service”.

Related Topics:NDA coursemates laud Abdusalami’s contribution to democracy
Up Next