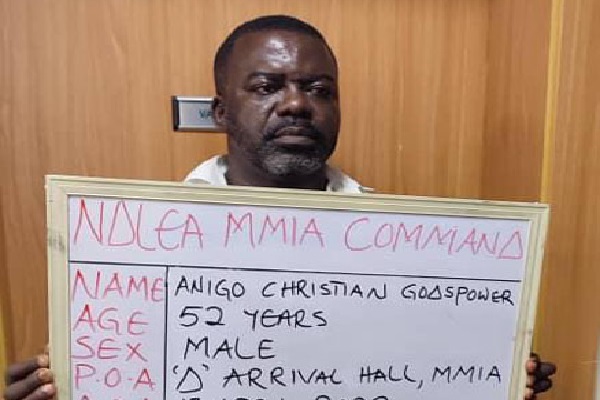 Justice Chukwujekwu Aneke passed the verdict following Anigo’s plea of “guilty” to a one-count charge of unlawful importation of the banned stimulant.

The court heard that the 52-year-old was intercepted on April 19, 2021, at the D-Arrival Hall of the Murtala Muhammad International Airport (MMIA), Ikeja, during an inward clearance of passengers on Qatar Airways from Sao Paulo in Brazil via Doha in Qatar to Lagos.

When his luggage was searched, two blocks of cocaine with a total weight of 2.10kg were discovered.

Following Anigo’s plea, the court adjourned for a review of the facts and sentencing.

At the resumption of proceedings on Tuesday, the prosecutor tendered the bulk of the seized drug, Anigo’s statements, and his Nigerian and Canadian passports, among others, which were all admitted as exhibits.

In a bench ruling, Justice Aneke sentenced Anigo to three years imprisonment from the day he was arrested, but with an option of a N3million fine.

Justice Taiwo gave the defendant 12 months within which to refund the money to his victim.

The judge held that the prosecution proved the offence of stealing against the defendant and he is convicted of the six count charge of preferred against him by the Economic and Financial Crimes Commission (EFCC).

Related Topics:Nigerian-Canadian jailed three years for importing cocaine
Up Next