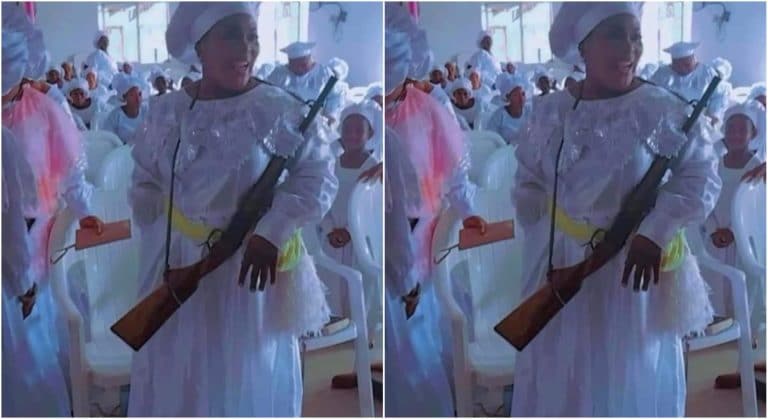 A Nigerian lady has become a sensation online after storming a church service with a gun in an undisclosed location.

This is coming barely a week after unknown gunmen opened fire at members of a Catholic Church in Owo, Ondo State.

The massacre was widely condemned by many Nigerians, celebrities and political office holders.

While some claimed the attack may be political, others said it was directed at the State Governor, Rotimi Akeredolu.

In the picture making the rounds online, the lady who is a Celestia Church member was seen with her white dress and a gun during the church service.

The lady’s decision is no doubt connected to the recent gruesome murder of Catholic members in Owo and has probably resorted to protecting herself.

The lady’s action generated mixed reactions from some netizens.

kelisweet1 wrote: “My sistee this one no be gun o compare to the dealt machine these bandits are carrying”

deraspascal wrote: “It’s good to be at alert”

yungceo_soulex wrote: “It looks funny but come to think it, F*cking rubbish rather not go and pray in your villa then eat watch movie”

Related Topics:Days After Owo Catholic AttackNigerian Lady Storms Church With Gun
Up Next