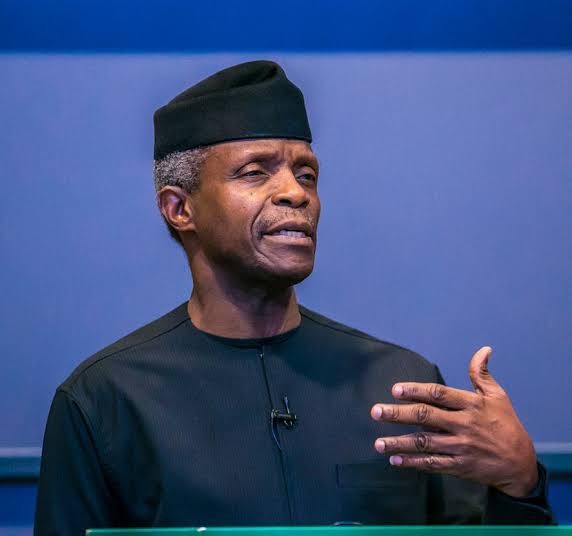 Vice-President Yemi Osinbajo on Sunday charged traditional rulers to join hands with the state and federal governments to ensure adequate security of lives and property of Nigerians.

Osinbajo gave the charge in Ibadan at a programme organised by a socio- cultural group, Yoruba World Centre, to celebrate Olubadàn of Ibadan, Oba Olalekan Balogun’s first 100 days on the stool.

The vice-president, who was represented by a legal luminary, Niyi Akintola, said the charge became necessary for peace and tranquillity to reign across the country.

He said traditional rulers should also prioritise promotion of culture and tradition, saying this would enhance peaceful coexistence and encourage brotherhood.

Osinbajo charged Yoruba people, whom he described as people of honour and integrity, not to give room to “those who try to destabilise our brotherliness through the display of abnormal acts; that is not who we are.

`We are `Omoluabis’ (well-bred); we have respect for culture and tradition; we respect our elders; we cherish and encourage mutual progress for peace and tranquillity in our communities and in the nation.’’

He eulogised Oba Balogun, saying for many decades, the Olubadàn had shown to be a leader who deeply cared for the common man, for progress and for the development of the nation.

He charged Oba Balogun, as custodian of the ancient culture and traditions of Ibadan, to continue to embody the best value that the people of Ibadan hold.

In his remarks, chairman of the occasion, Sen. Rashidi Ladoja, the Otun Olubadàn of Ibadan, commended organisers of the event for promoting Yoruba culture.

Ladoja, who was represented by Chief Sarafadeen Ali, congratulated Oba Balogun on his 100 days as Olubadàn of Ibadan.

He said the event further demonstrated that there is harmony and unity among the Yoruba.

He prayed that Kabiyesi would live long on the throne to witness reigning years.

Earlier, one of the organisers, Mr Adebayo Alao, publisher of Alaroye Newspaper, said the event was put together to showcase the rich culture of Yoruba people and also to celebrate Oba Balogun on his 100 days on the stool.

Alao said the promotion of Yoruba culture and tradition was capable of creating job opportunities for Yoruba sons and daughters.

Oba Balogun, in his remarks, appreciated the Yoruba World Centre and well-wishers that attended the programme in his honour.

He pledged to support all activities towards the promotion of Yoruba culture and tradition.

The News Agency of Nigeria (NAN) reports that highlights of the occasion were different cultural performances such as Bata sequences, Esa Eegun and Oriki.

Among dignitaries in attendance were Oba Adedokun Bolarinwa, Orangun of Oke-Ila and representative of Oba Adeyeye Eniitan, the Ooni of Ife. (NAN)

Related Topics:Osinbajo charges traditional rulers on insecurity
Up Next

Despite N120 billion budget, we have no data allowance, electricity to do our work, Supreme Court justices revolt against CJN Tanko