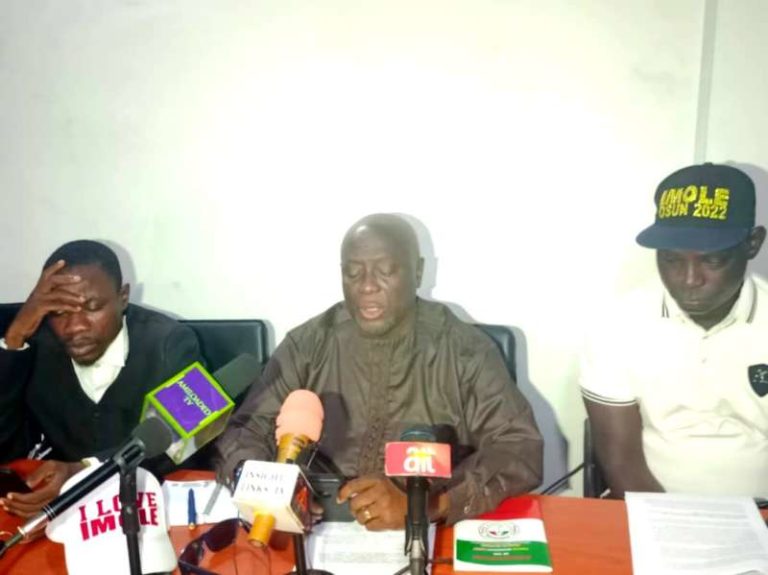 Campaign organisation of the Peoples Democratic Party (PDP) governorship candidate in Osun, Senator Ademola Adeleke has warned the Independent National Electoral Commission (INEC), against appointing an All Progressives Congress apologist as the state returning officer of the July 16 poll in the state.

The campaign organisation also accused Governor Adegboyega Oyetola and the APC in the state of deploying state power against PDP members by unleashing Amotekun operatives against them.

Addressing journalists at the party secretariat in Osogbo on Monday, the head of the campaign’s legal team, a former Attorney-General and Commissioner for Justice in the state, Mr Niyi Owolade, said the APC three fold plans against free and fair poll include, unleashing violence against PDP supporters, buying of votes and appointment of APC apologist as State Returning Officer for the election.

Owolade said the PDP will deploy any legal means to ensure that its votes were not stolen by the APC like it happened in 2018.

He said, “Our press briefing is focussing on three evil agenda of the APC whose implementation has started going by recent sad developments in the state. These include direct violence on PDP leaders and supporters, appointment of a compromised State Returning Officer in person of the Vice Chancellor of University of Ibadan and deployment of ill gotten wealth to buy votes and compromise the electoral architecture. At a time the PDP is mobilising the people of the state for mass participation, we regret to announce that the APC is preoccupied with how to kill, maim and rig the election under an advanced anti-people agenda.

“In the last three weeks, APC has embarked on a systematic attacks on PDP supporters using the Amotekun operatives. This violent agenda reached a peak few days ago with the gruesome killing in cold blood of Akinpelu Kasim & Waheed Adebayo and shooting of Adesina Opeyemi, innocent citizens, who were shot dead by some AMOTEKUN Corps on Tuesday 14th June, 2022, around 9am at Asoje Area, Osogbo, Osun State. It is regrettable that the AMOTEKUN Security Outfit established for the purpose of strengthening regional security of boundaries to curb the activities of bandits, kidnappers, terrorists, etc has now become a tool of oppression and attack in the hands of some desperate politicians of the ruling Party in Osun State.

“The party then demanded that the Inspector General of Police, Alkali Baba to deploy operatives to investigate violence against its members, as well as move to induce voters to compromise the electoral process”.

Reacting, the spokesperson of Governor Adegboyega Oyetola campaign council, Sunday Akere said the PDP and Adeleke team are accusing the APC of what is known as their trade-in-stock.

“The PDP and Adeleke team are afraid of their own shadow. We are not unaware of the fact that they were mopping up voters card in Ede from the people with plans to release them to their owners on election day.

“The APC is the party of the masses, our track records speak volume, we cannot begin to unleash violence on our own people. Our focus is on the goal, that is winning the poll that is why the Governor has been leading the campaign trail to all the local government by himself selling his manifesto. What the PDP has promised the people is a fire for fire approach and the availability of dollars, pounds and naira. They are only accusing us of plans they have perfected to implement”, he said.