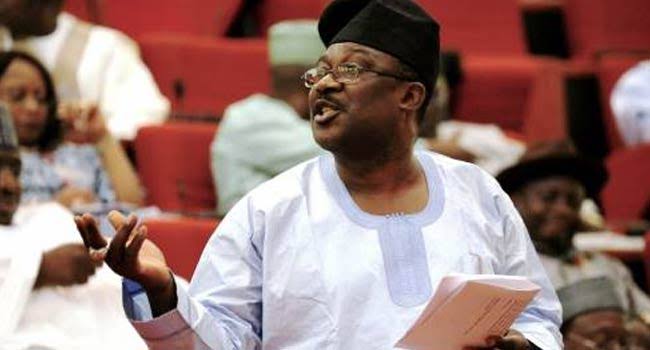 Senator representing Kogi West in the Senate, Smart Adeyemi, has said that the recent party primaries have unearthed irregularities in the Electoral Act 2022

Senator Adeyemi stated this while briefing newsmen at the National Assembly complex in Abuja on how he lost the return ticket to the senate in the just concluded primaries in Kogi West Senatorial district.

He said the irregularities in the Electoral Act were so much that it need urgent amendment even before the 2023 general elections.

He however said that he has no regret supporting the presidential bid of his state governor, Yahaya Bello, despite the latter’s opposition to his return to the Senate.

Recall that Adeyemi lost the All Progressives Congress (APC) ticket for Kogi West Senatorial District to Sunday Karimi at the party’s primary held on May 28, 2022, in Kabba, Kogi.

The lawmaker said he participated in the primary against the advice of the state’s APC chairman, Abdullahi Bello, whom, he said, asked him to step down and work fully for the presidential bid of Governor Bello.

At the end of the poll, Sunday Karimi scored 288, Muyiwa Aina polled 73 votes and Smart Adeyemi came third with 43 votes.

He said a closed meeting, called by the state’s party chairman at the instance of the governor, to pressure him to withdraw from the race was deadlocked as he insisted on going ahead.

“I want to say that I have no regrets in supporting and standing for the Kogi State Government at all given times. I have no regrets supporting the governor of my state, Yahaya Adoza Bello, it remains the proper thing to do and we must always endeavour to do what is right,” Adeyemi said.

He alleged that the primary was marred by irregularities, saying the delegates were replaced with those not from Kogi West 24 hours before the primary, which, he said, was held in an extremely hostile environment.

Adeyemi, who chairs the Senate Committee on Aviation, said he had petitioned the APC national body over the “unfair” primary for record purposes.

“The accusation that I have stepped on toes by my position on contemporary national issues constitutes a major part of my many offences, and I have absolutely no regrets on the matter.

“If the hands of times are turned, I will stand in the same position, speak my mind, the minds of the common man on the streets and project only those values which I believe in,” he added.

In another development Senator Adeyemi disclaimed the picture trending on the social media denigrating the person of Governor Bello.

He said the picture trending on social media was done by some political jobbers intended to set him on the warpath with the governor.

Senator Adeyemi said he is known for speaking the truth and was not afraid to own up to his action if he was the one.

He stressed that he has great respect for Governor Bello even though he was rigged out from the senatorial primary, perpetrated by the state machinery set against him by henchmen to the governor.