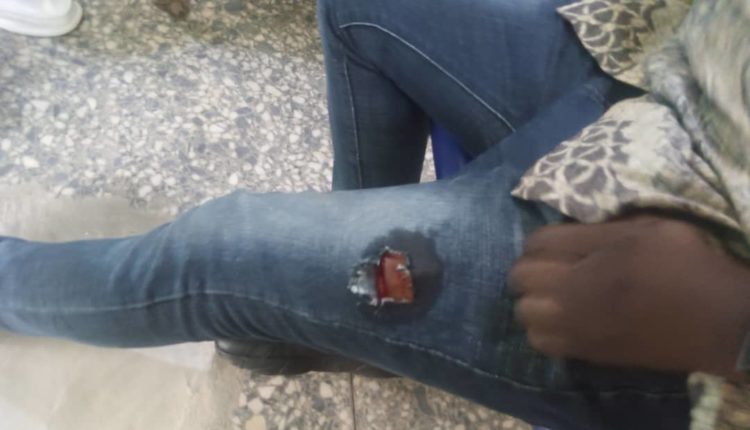 Track News Nigeria covers that Prince Dotun Babayem, who is a notable leader in Osun State under the umbrella of the People’s Democratic Party (PDP), has called on the state government and the police authorities to instantenously probe the ungodly event that led to the shooting of The Nation News’ Correspondent, Mr. Toba Adedeji.

Recall that Track News Nigeria has earlier reported how Adedeji was hit by the police bullet during a protest that took place in Osogbo, the capital of the state, while he was covering the incident for media report.

During his sudden visit to the recuperating reporter at his apartment in Osogbo at the weekend, Babayemi stated that: “I want to deeply sympathise with you (Toba) and two other victims said to have been affected, but who we are still unable to reach. Seriously, we believe that this ugly path of victimisation is avoidable and its recurrence is becoming unbecoming.”

He claimed that there was need for the police and other related security agencies to be re-orientated on civil engagements, particularly during riotous situations.

“To this end, I want the state government to put in place, a powerful panel to look into the matter, punish whoever is found culpable and make recommendations on how such ugly path can be avoided in future,” he said.

Adedeji, while commending Babayemi for the visit, commented that he was overwhelmed because he never thought he could play host to caliber of the PDP stalwart at his home.

Related Topics:PDP Chieftain Demands Justice For Toba Adedeji
Up Next