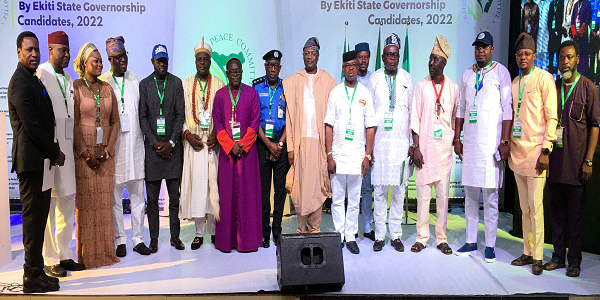 Chairman of National Peace Commission (NPC) Gen. Abdulsalam Abubakar (rtd) said the initiative was to commit the political parties and their candidates to a peaceful election.

Abubakar, represented by the Convener and Bishop of the Sokoto Diocese of the Catholic Church, Matthew Kukah, appealed to the candidates to see the election as a game with sportsmanship and not a do or die affair.

He advised the stakeholders to demonstrate commitment to the spirit of the accord, saying violence-free election is a fundamental means to sustainable peace and development.

The elder stateman pleaded that peace and national interests should override every other consideration, adding that a fair and credible election cannot hold in an atmosphere of discord. He also urged the voters to go out peacefully to vote for their preferred candidates.

“The main reason for this meeting is for stakeholders to have understanding on the need for a peaceful election; it is an opportunity for candidates to sign an undertaking for a peaceful exercise.

“We again appeal to all political parties and their candidates to ensure that they do not see the signing of this Peace Accord as a mere formality and a photo opportunity. May the friendship exhibited here follow you through the elections”, he added.

Oni: I have no deal with Tinubu on poll