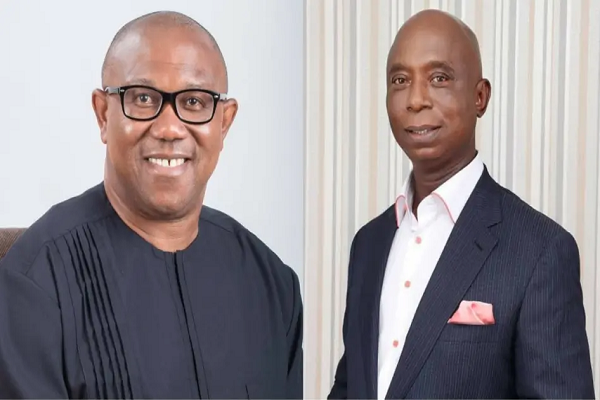 He advised the former Anambra Governor to return to the PDP and pick a ministerial appointment.

The former House of Representatives member in an exclusive interview with the BBC explained Peter Obi’s current party lacks the structure to produce the presidency despite his seemingly large support base.

He eulogised Obi, describing him as a very ‘frugal and conservative’ in his dealings while he was Governor.

Nwoko, who is hubsand of movie star Regina Daniels, said: “People Obi is a good man, I’ve known him for many years. When I did my Paris club refund for Anambra State, he impressed me.

“He impressed me because he will actually pick the phone to arrange my flight. He will pick his phone to book my hotel. And he was the governor.

“He actually came to London and didn’t come like other governors that came to see me, to give me instructions. He came alone, carrying his bag.

“Peter Obi is a capitalist, don’t get me wrong. He is a big time player in the business world. But he is very frugal, he is very conservative, the way he handles things.

“We will like him back in the PDP. I would want to be one of those that’ll encourage him to come back to PDP. We can have him.

“He will do very well as the Minister of Economy. He will help us run the economy. In eight years, the Nigerian economy will start to turn round. He would do that, I know, we will have a very capable hand, he will do that.

“I mean he is making an impact now, no doubt. But I cannot imagine the swell of support to translate to victory for Labour Party. Labour Party doesn’t have the structure.

“The kind of structure we are talking about is not the support base, it’s included though. But there are unions, the labour unions, students, the market women and all that.”