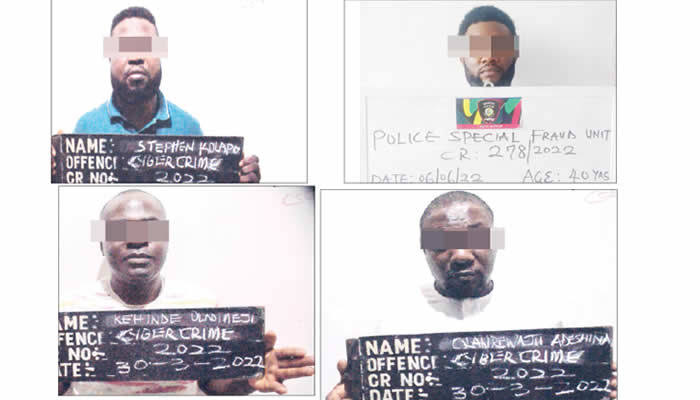 Three suspects have been arrested on Wednesday for attempting cyberattacks on 10 Nigerian banks in Lagos. The Police Special Fraud Unit spokesperson, SP Eyitayo Johnson said in a statement, that the Commissioner of Police, PSFU, Nneka Anyasinti, while acting on intelligence received from a leading new generation bank, on March 30, 2022, arrested the suspects.

Johnson said the suspects of cyberattacks had finalised the recruitment of a member of the information and technology department of one of the banks in order to perfect the hacking of the banks’ network/posting application with the intent to siphon huge sums of money.

He further explained that the suspects were arrested with incriminating exhibits during a meeting held with the bank worker they attempted to recruit, adding that the fourth suspect, Chibuzor Holland, who flew into the country from France specifically for the operation, escaped.

He said, “The arrested members of the syndicate include Kehinde Oladimeji, 52, the mastermind; Olanrewaju Adeshina, 47; and Kolapo Abiodun, 42. Kolapo Abiodun is a former staff of the bank attached to the infotech department.

He contacted and attempted to recruit a current worker of the bank’s infotech department with an offer of N200million and a visa out of Nigeria.

“The worker was asked to leave critical gateways open on the bank’s server for the syndicate to gain unauthorised access into the network and move money out using Python application and Zoom. After the arrests, forensic analysis of phones and electronic devices found in their possession disclosed a list of 10 other banks already earmarked to be hacked using a similar method once the first attack is successful.

“Operatives also discovered personal and corporate bank account details in the possession of the syndicate which they ought not to have. The case, charge no. FHC/L/238C/2022, is currently being prosecuted before Honourable Justice P.O. Lifu of the Federal High Court, Lagos Judicial Division, while effort is in top gear to apprehend Chibuzor Holland.”

In a related development, the police unit has arrested the Managing Director of Beedel Strategic Investment Co. Nigeria Limited, Moses Odeleye, over a fraud of N816m.

Odeleye was arrested on May 24, 2022 through discrete investigation by the unit’s operatives.

He noted that Odeleye was arrested in connection with the forgery of 11 local purchase orders of five multinational companies operating in Nigeria and one agency of the Federal Government.

Johnson stated that the suspect (Odeleye) paraded himself on social media as a contractor with interest in civil engineering, construction, real estate and supply, and importation of heavy engineering equipment.