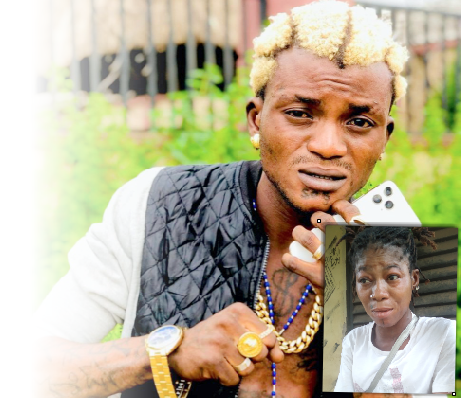 In a bid to unravel the mystery behind maverick musician, Habeeb Okikiola aka Portable, Gboyega Alaka took a trip to his Oke-Osa community, a suburb of Sango-Ota, Ogun State, where he grew up. Just what manner of a kid was he?

To many, his was sudden stardom. Before December 2021, probably, no-one, except those who knew him, knew him. However, in the short time since he released his hit song, ZaZoo Zeh, in which he collaborated with top singer, Olamide and dancer Poco Lee, controversial hip-hop singer, Mr Portable (real name Habeed Okikiola), has been in everyone’s eyes. Thanks majorly to his unique blonde hairstyle, his funny dances, funny, often lewd lyrics, brazen acts and slipshod talks.

A lot of his popularity will also go to the power of the internet, which has undoubtedly made everything he says or does, however controversial, go viral. Immediate examples would be his trip to Kenya, where he released some bedroom videos with some pretty girls. On another occasion, he referred to a female Kenyan fan as ‘hook-up,’ angering several Kenyan fans, including a radio personality, Black Cinderella, who called him out and demanded an apology.

A bit later into the year, he was also quoted as querying the NDLEA, the nation’s agency against illicit drug use and drug trafficking after the agency had invaded the homes of artistes, Zinolensky and MohBad and arrested them over use of drugs. In a video that went viral, he was seen asking: “Can we not smoke weed in our own house again? Are you the ones that built our house or bought land for us? What is it?” As if laws of the nation exempt the ones committed in ones homes. That rant drew a lot of ire and pity from members of the public, who warned him not to over-reach himself in his ignorance.

Overtime, he has also been seen throwing money in the air for people to pick. While many consider it as his way of appreciating the condition of poor masses, of whom he was one until very recently, many see it as public nuisance. He has further stepped up that act following his N50million endorsement deal for Obi Cubana’s Odogwu Bitters.

Over a month ago, videos of him the United Kingdom, The United Arab Emirates and Turkey also surfaced on the internet. Not one to miss out on an opportunity to troll, he was seen taunting his former promoter, Kogbagidi, over his refusal to facilitate his trip to the UK, saying he had finally landed in the London he saw as a big deal.

Days after, another video went viral, where he was asking his team at the airport if he could smoke weed in the Islamic Republic, saying he smoked in London.

Not one to shy away from controversy for long, he tweeted shortly after, where he asked fans to give him just two years and he’d be bigger than Wiz-Kid, a more illustrious hip-hop singer. This was the same artiste he cited as his inspiration in the music world less than six months before.

In perhaps his most controversial rant, Portable threatened to kill co-nominees in the two categories – Best Street Hip-Hop Artiste and Rookie of the Year, he was nominated for this year’s edition of the Headies Award. The shirtless artiste was seen announcing his nomination and saying in Yoruba, “All those awards, I own them. Whoever is given the awards apart from me, I’ll ask them to kill the person…” Not a few was outraged by that rant, including organisers of the award , who promptly reported him to the Police. The singer promptly retracted the statement.

Why we’re excited over his breakthrough – Family 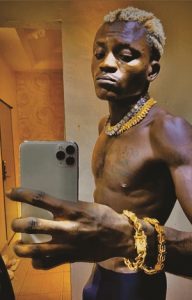 According to Portable’s sister Aminat Okikiola, a petty trader, who runs a groceries store in Oke-Osa area of Iyana Ilogbo, Ado-odo/Otta Local Government Area of Ogun State, where the singer grew up, Habeeb (Portable) started showing traits of his singing talents right from childhood, before their mother died and she took up his upbringing.

“He started showing his talent for singing from childhood before our mother passed. Right after our mother’s death, he intensified the habit, to the extent that if I sent him on any errand, he would sing throughout the trip. If I gave him a chore, he would sing throughout the chore. I thought it was a joke, like a passing phase. If he was sitting down, he was singing. At a point, I started wondering ‘what kind of thing is this?’ Eventually, I enrolled him with a tailor to learn tailoring. The plan was for him to learn that trade and have a means of livelihood. Funny enough, he learnt sewing, knew the job well and was able to sew well. But he did not ditch his passion, as he kept singing.”

About his schooling, Aminat said, “Of course he went to school. He attended Iganmode Secondary School in Ota. Primary school was in Iyana-Iba area in Lagos. There was a time he went to stay with our uncle in Obasanjo area of Ota. I can’t remember the school he attended while he was with him. It was after that he went to Iganmode Secondary School. Then my mum had died. I was twenty when mum died. I am ten years older. I took him in and brought him up. So I am like a mother to him.”

What about their dad? There is a story that their father was nowhere to be found during the boy’s growing days, but has suddenly showed up, enjoying the fruits of the his success, to the extent that he even bought him a car?

“That’s not true” she said flatly.

“People like to tell stories they know nothing about. My father played his own part in Habeeb’s growing up, even though the family was separated. There was a time I even took him to stay with my father in Abuja when he started this singing thing. He lived with him in Abuja for about seven years but he was still pursuing his singing career. When he saw that it was his passion, he left him to horn it until fortune smiled on him. So let nobody tell you that my dad did not play his part in his growing up. Of course, married couples separate, but they can still impact one another positively, if they know their responsibilities and duties. Later our father returned to Lagos and he kept being active and supportive in our affairs, particularly Habeeb’s. If I called him that I was having any challenge with Habeeb, he would respond. There were times even came over to see to certain matters. Now he stays in Lagos and he is able to see us more regularly.”

Could that be the reason Portable bought him a car? Recall that one of the first things the maverick musician did when he hit limelight was to buy his dad a car.

“Yes of course. Why not? If my mum were to be alive, he would have bought her a car too. I am also praying that God continues to bless him, so that he can buy a car for me too, because I played a great part in his growing up. I suffered bringing him up. It was just the two of us, before dad came into the picture.”

Even now, Aminat, who runs a provision store in front of her house, said, she is already feeling the impact of Portable’s success. “He is supporting me financially, I cannot deny that. He supports my business as well.”

This reporter also chose the moment to ask Aminat about a little bungalow under construction a few meters from her own home.

Earlier in the day, when this reporter landed the Oke-Osa neighbourhood, a sleepy community in Iyana Ilogbo near Sango-Ota, where Portable was brought up, most people spoken to kept directing him to a little bungalow under construction, a few meters from Aminat’s house. Then of course, the musician’s only direct relative, Aminat, was said to be away at the market.

“Yes, it’s his house. He is building it for himself.”

Notably, she revealed that it was their dad who was supervising the construction of Portable’s new home.

“That should underline the level of rapport and trust between father and son”, she said.

Asked how she feels about her brother’s sudden success, Aminat’s eyes brightened. “I am happy for him because he suffered. He suffered a lot and I can tell you this be cause I am a living witness. On several occasions, when he seemed down, I would encourage him. And then he would tell me, ‘Sister, don’t worry, I will make it.’ During those moments, he would also say to me, ‘One thing I will tell you is that I will never take what does not belong to me. I will not steal or engage in any shameful act that will bring disgrace to you. But this blow, I must blow.’ And I have said amen to his prayer.

“He has been singing for at least seven years. In truth, some of his songs are very deep. It just happens that it was this Zazoo song that brought him to limelight. Sometimes he would sing some songs and you will be wondering if such song was coming from this little boy. And I would be praying for him to meet somebody who would sign him, because I saw his potentials.”

Asked to speak on the viral video that had her brother paraded naked for allegedly stealing a tricycle popularly called ‘Marwa’, Aminat said, “No, he actually did not steal. That incident actually happened a long time ago, long before he broke into limelight. He had a disagreement with his then promoter, Ija Omode Yusuf, which was settled in no time. It was the boys of Ija Omode, who is a strong transport union leader, who falsely accused him of stealing and stripped him naked to embarrass him. But when Ija Omode heard of it, he was very upset and even came here to apologise and beg him.”

Aminat also vouched for Portable’s cool-headedness as a growing child, leaving one to wonder where the weird lifestyle, marijuana smoking and careless talks came from.

“In truth, he has always been a tough boy. However, he never stole. Throughout his growing up, nobody ever reported to me that ‘hey, your brother stole this or that. But of course, he has always been full of songs, pranks and all sorts of jokes and funny slangs. Sometimes, he would gather kids and start playing pranks and all sorts of slangs with them. Sometimes he even picks on me too.”

About his hemp smoking habit, she said, “Funny enough, I cannot tell when he develop this love for marijuana. The Habeeb, the Portable that I know and brought up never smoked hemp. In fact, he didn’t smoke cigarette or drink alcohol. So I am surprised at the development. Even now, I could almost swear that he does not smoke or drink. I guess it comes with the profession and stardom.”

Does she subscribe to the general belief that marijuana gives artistes inspiration?

Aminat laughed heartily and said, “I don’t know. I have never smoked marijuana, so I cannot tell.”

Related Topics:AminatPortable that I raised never drank or smoked – Sister
Up Next