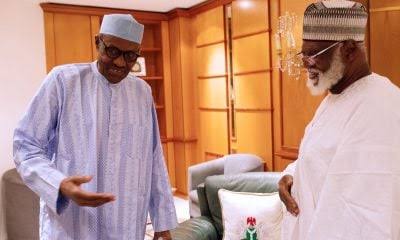 President Muhammadu Buhari’s Senior Special Assistant on Media and Publicity, Garba Shehu has shed light on the state of health of ex-head of state, Abdulsalami Abubakar.

TrackNews had earlier reported that the former head of state was flown out of Nigeria over health-related issues.

He further stated that he is out of the hospital in London, adding that there is no cause for alarm.

Shehu added that the former head of state is his jovial self and is also concerned about the developments back in Nigeria.

“I just ended a visit to His Excellency Abdulsalami Abubakar, former Head of State.

“He is out of the hospital in a London apartment and apparently in no serious condition.

“He was his jovial self, maintaining a keen interest in developments back at home in Nigeria. Please, no cause for alarm.”

Related Topics:Abdulsalami Abubakar’s HealthPresidency Gives Update On Ex-Head Of State
Up Next