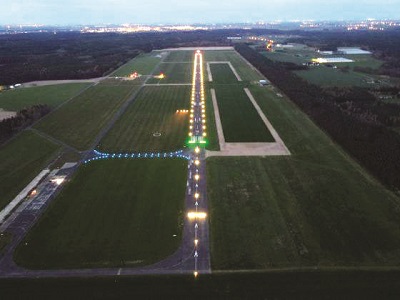 The Federal Government is set to tackle the absence of airfield lighting of the runways at the Lagos Airport, KELVIN OSA-OKUNBOR reports.

Plans by the Federal Government to improve safety in the aviation sector received a boost last week when it moved to replace old airfield lighting cables at the Lagos Airport.

The move, it was learnt, is part of the government’s agenda to fix sore infrastructure that dot some aerodromes across the country.

Replacement of the airfield lighting system at the Lagos Airport is coming after complaints by indigenous carriers.

Investigations by The Nation indicate that the government feels it is high time to put in place an AirField Lighting (AFL) for the 2.7 kilometre 18L/36R domestic runway of the Murtala Muhammed Airport (MMA), which was recommissioned in 2008 after rehabilitation without runway lights.

This resolve could not have come at a better time, following complaints by domestic airlines, which listed lack of lighting on the runway as one of the reasons flights are either delayed or cancelled.

Last week, Minister of Aviation, Hadi Sirika, succeeded in getting another N3,523,592,079billion approval for safety-critical projects of the Ministry of Aviation from the Federal Executive Council (FEC).

Experts have raised concerns on sunset landing and lack of airfield lighting in most airports but are particular about the MMA and the cost of landing at the international terminal to their operations.

In February, this year, Chairman United Nigeria Airlines, High Chief Obiora Okonkwo, during the airline’s first anniversary, said the inability of the Federal Government to install airfield lighting at Runway 18L of the MMIA led to flights delays and cancellation and increase of about 40 per cent of their operational costs – spent taxing and holding.

The Federal Airports Authority of Nigeria (FAAN) announced in August 2020 that the AirField Lighting (AFL) of 18L MMIA would come on stream by last year with standard lighting and in August 2021, the airports manager said it and the Ministry of Aviation has agreed for the Minister to resolve the contract issue delaying the 18L Runway light and once documents are complete it will procure and install the AFL in six months, that is where government is at on that.

FAAN had to shut the international runway and reopen when the aircraft was removed, this happened during the height of COVID-19.

Captain Rabiu Hamisu Yadudu, said: ”18Left has been delayed because of a contract that has been for many years and finally, the minister has graciously accepted to resolve that issue that has been protracted and he has agreed to grant us permission or approval to quickly procure a new lighting system.You know FAAN cannot procure a new project when there is an existing one on the same facility. So many things you see that are delayed, are not delayed because of negligence or lack of attention it’s because you have to follow due process.

“It is, however, part of the government regulations that you cannot procure the same thing twice until you resolve the first one. The ministry has resolved the first one and has taken over, freeing FAAN now with an approval to quickly resolve it because it is a critical requirement. So, the key consideration for us here is that if not for the existing contract, we would have finished that before taxiway bravo.

With this recent FEC approval to the minister, one expects that the 2.7 km runway ’18 Left’ domestic wing of the Murtala Muhammed Airport, Ikeja, would come online and provide succour to airline operators and better yet cancel that out as a reason flights are delayed and/or cancelled.

Related Topics:Ray of light for airfield
Up Next