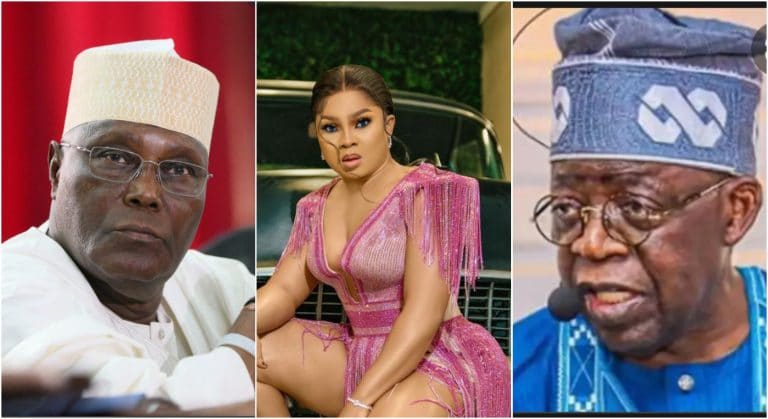 Nollywood actress Regina Chukwu has opined that Nigerian entertainers play a major role in influencing who some of their fans would vote for.

This is coming a few days after the actress warned some of her colleagues campaigning for the PDP Presidential candidate, Atiku Abubakar and the APC Presidential flagbearer, Bola Tinubu.

In a recent interview with Tracknews , Chukwu said entertainers have some die-hard fans that would support whichever politician their faves are campaigning for

The mother of two noted that everyone has a right to vote for their preferred candidate but collecting money from politicians is of no gain.

According to the actress, when celebrities start rejecting money from politicians, they would start seeing them as serious people who are not after wealth.

Chukwu added she has started encouraging citizens on her social media page to participate in the forthcoming election and not to sell their votes.

She said: “Entertainers influence people. Or, why do you think business owners pay entertainers to influence the sale of their products? Let’s not be biased. We (entertainers) have some die-hard fans and they would support whichever politician we are behind.”

“I know it is a personal decision. However, we have been doing the same thing over and again, so why don’t we do it in another way this time around? I believe people should be allowed to vote for the leaders they desire for themselves.”

“It is not like we are doing it for the love of the country. After collecting all these monies, what do we gain after the elections?”

“If we reject money from these politicians, they (politicians) will start to see us as serious people. I will start campaigning on my page, imploring people not to sell their votes.”

“I have been encouraging my followers on social media to get their permanent voter’s cards. Voting is the right of every adult citizen. I believe we can eventually get things right.”

Related Topics:Regina Chukwu Speaks On Collecting Money From Politicians After Vowing To Fight Atiku And Tinubu’s Supporters
Up Next