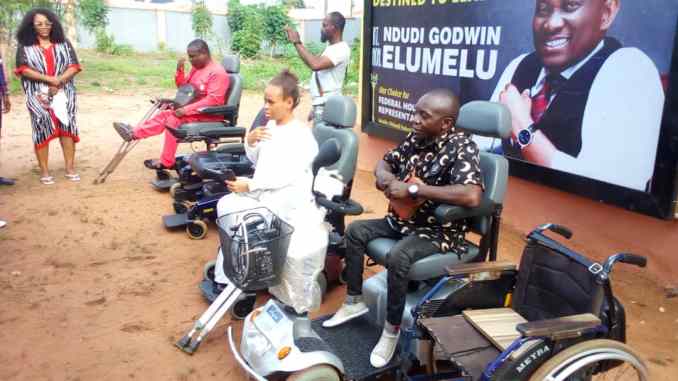 The Minority Leader in the Federal House of Representatives, Hon. Ndudi Elumelu, has donated four automated wheelchairs to four physically challenged persons in his constituency.

Elumelu said the kind gesture became imperative in a bid to ensure that those living with disabilities were not left out in the scheme of things in his effective representation.

Represented by Hon. Augustine Chikezie, the minority leader said the gift was necessitated barely one month of encounter between Elumelu and the physically challenged people.

He said the lawmaker was touched seeing the struggle and energy being exhausted on daily basis using the manual wheelchair to go about their daily business.

Speaking on behalf of the beneficiaries, Mr Austine Juwe, from Obomkpa while expressing his joy prayed for Hon. Elumelu to succeed in his political journey.