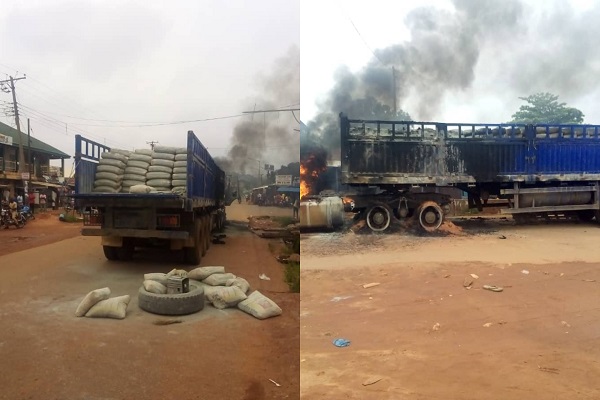 Enforcers of sit-at-home order on Monday set ablaze a truck loaded with cement in Enugu State.

The fire also destroyed about 600 bags of cement loaded on the truck.

The incident, which happened at Beach Junction Nsukka town, in Nsukka Local Government Area, was said to have occurred in the early hours of Monday.

The perpetrators were said to have blocked the truck at Beach Junction Nsukka where the driver and his conductor fled before the truck was set ablaze.

Enugu Police Command was yet to react to the development as the whereabouts of the driver and his conductor was not confirmed.

Efforts to get the police reaction were unsuccessful as Enugu Police spokesman Daniel Ndukwe could not be reached as at the time of filing this report.

His phone was switched off.

Related Topics:Sit-at-home enforcers burn cement truck in Enugu
Up Next