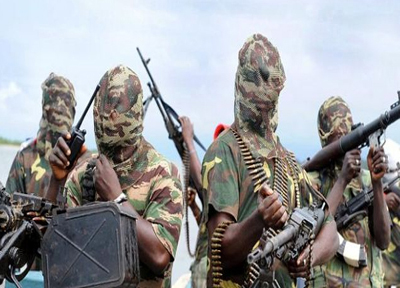 The state government confirmed that the gunmen attacked Maranatha Baptist Church and St Moses Catholic Church in Rubu area of Kajuru council of the state.

The worshipers were rounding off their first mass when the assailants attacked.

One critically wounded congregant was rushed to hospital, it was said.

Some of the victims were buried at the weekend.

The Islamic State of West Africa Province (ISWAP) was blamed for the massacre.

The Nation learnt that bandits, who attacked the churches in Kaduna, came in large numbers on motorcycles.

After the killings, the terrorists took away many others, leaving the wounded on the floor.

Commissioner for Internal Security and Home Affairs, Samuel Aruwan confirmed the attack in a statement.

“According to the report, the bandits stormed the villages on motorcycles, beginning from Ungwan Fada, and moving into Ungwan Turawa, before Ungwan Makama and then Rubu.

“The bandits looted shops and carted away some valuables from the villages,” the commissioner said.

Police in Imo said yesterday that three of five persons attacked and shot on Thursday by armed bandits in front of their compound at Umuebele Okporo in Orlu area of the state have died.

Commissioner of Police, Mohammed Ahmed Barde, in a statement, revealed that, the victims were having meeting in front of their compound at about 8am on Thursday, when suddenly some yet to be identified gunmen operating in a red Toyota Sienna vehicle without registration number, stormed the venue, shot at them severally and zoomed off almost immediately to an unknown destination .

“Consequently, three persons died on the spot while two others sustained various degrees of bullet wounds and were rushed to a nearby hospital for treatment. The corpses were later recovered and deposited in the mortuary.

The police boss said investigation is ongoing, adding that the community and environs had been fortified with more security personnel.

“More so, the command is working in collaboration with other security agencies to ensure that the perpetrators of this dastardly act are arrested and made to face the full wrath of the law.

The government absolved the state-controlled Vigilance Group of responsibility for the recent killing of three family members in Okporo, Orlu local government area.

The Commissioner for Information and Strategy, Hon Declan Emelumba in a statement said the “Vigilance Group works under the supervision of the police and therefore cannot engage in any extra-judicial killings”.

In Edo, 13 mourners, including the bus driver, who are members of a church, have been kidnapped on the Auchi-Benin Highway.

The assailants have demanded N60 million to free the captives.

Members of the church were reportedly returning to Delta State after attending a burial in Akoko-Edo area of Edo State.

Police spokesman Chidi Nwabuzor said he had not been briefed on the incident.