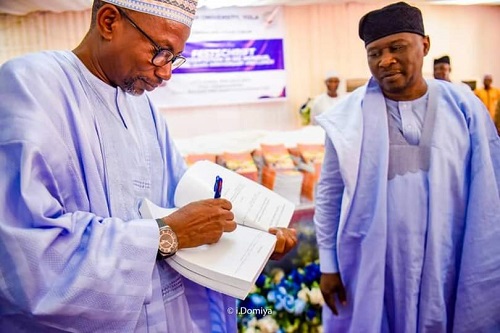 The Modibbo Adama University (MAU), Yola, has demoted three Professors in line with its renewed commitment to strengthen discipline.

Its Deputy Vice Chancellor, Professor Muhammed Ja’afaru, who announced this at the weekend in Yola, said the demotion was a highlight of steps the University has taken in recent times to instil sanity in the university community.

Ja’afaru made the announcement as presenter of achievements of Vice Chancellor of the University, Professor Abdullahi Tukur, during a lunch and book unveiling to mark Abdullahi Tukur’s third year as the VC.

Ja’afaru said at the event in Government House Yola on Saturday, that Abdullahi Tukur’s leadership as VC so far has been one of of deep commitment to discipline.

He said MAU had not been noted for sexual misconduct but that as part of a wholesale precautionary measure, especiqlly in view of its prevalence in many higher institutions, a code had been drafted by MAU to handle such issue should it occur.

Ja’afaru who made much of the remark in a press interview in the course of the 3rd anniversary lunch and book unveiling for Professor Abdullahi Tukur, said: “We have a policy against sexual harrasyment, there is a policy in place now.”

Affirming that the policy is Tukur’s legacy, Ja’afaru mentioned other landmark achievements of Tukur as including prudent management of financial resources by the managemsnt, establishment of money-making ventures that have raised the university’s internally generated revenue accreditation of nearly all courses that the university offers, introduction of IGMB programmes to enable students with deficiencies upgrade themselves for regular admissions, among others.

“There is now a medical school and we have admitted our first medical set of students for medical science and the FMC Yola has been approved as our teaching hospital,” he said.

Governor Ahmadu Fintiri who is a personal friend of the VC, said he was proud of the VC’s achievements in the last three years.