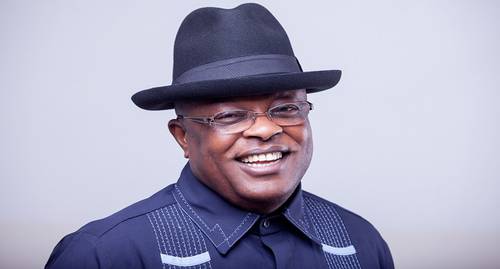 Ebonyi State Governor David Umahi yesterday expressed disappointment at what he called the high level of betrayal by delegates from Abia, Anambra, Enugu and Imo states during the just concluded presidential primaries of the All Progressives Congress (APC) and the Peoples Democratic Party (PDP).

But he singled out delegates from Ebonyi for making their state proud at both primaries by voting for aspirants from the Southeast.

It was a big shame, he said, that Igbo delegates failed to make a statement with their votes despite the widespread clamour for power shift to the zone.

Umahi, who sought the presidential ticket of the APC, got only 38 votes.

His words: “Let me first deviate a little before I come to what we are doing today. Ebonyi people are wonderful people. It will not be good for me not to take out time to express my gratitude to you after the presidential primary election.

“The presidential election was an eye opener for Ebonyi State. I thank God that through your support we had a victory. We decided to contest so that the Igbo people would not say that we do not have qualified people.

“The Igbo man has five states and we should be asking why. Is there any fairness? Other states have 40 to 50 local government areas. How do you expect an Igbo man to win?

“But the worst is the attitude of delegates from the Southeast.

“Only Ebonyi people in PDP stood for both the PDP and APC. It is a very big shame that our people are crying over marginalisation.

“I had a series of meetings with the party’s chairmen in the five states of the zone in the company of its national vice-chairman. I implored the delegates that the issue was not about me, but the mood of the Igbo in the nation.

“We would have made a strong statement in the process that the Igbo are eminently qualified with due capacity to lead the country.

“They will come later to preach about Igbo unity and its agenda but henceforth, the only agenda I know is the Ebonyi agenda. This shows that even if we have equal number of local government areas and delegates such as other zones, we would still trade our votes.

“We are currently regarded as people who can sell anything but they should remember that anyone who betrays his brother will lose the trust of those who gained from the betrayal.

“There was no sort of lobbying I did not receive, but I maintained that it was about bringing the marginalisation of the Igbo to the fore.

“You (Ebonyi delegates) have made yourselves reference points of steadfastness in the country and when people are seeking trustworthy people, they will come for you.

“I have lost total confidence in the leadership of the Ohanaeze Ndigbo socio-cultural organisation, and will openly confront anyone who challenges the Ebonyi agenda.”

“I am ashamed of the President of Ohanaeze Ndigbo. He can no longer be my president. It is a very big shame every Igbo man should be weeping for himself. And let me warn the youths in Ebonyi State that those leaders selling us out should not be considered our leaders again.

“You talk about marginalisation and Biafra and I continue to say that Ebonyi State cannot be part of Biafra. I weep for our leaders.

“Anyone that comes against the Ebonyi people, I will fight in public to protect the integrity of Ebonyi man. We must aspire and the kingdom of darkness cannot hold Ebonyi down.

“We have a fighting spirit and we have nothing to be afraid of. When honourable people are needed in the Southeast, they will look for Ebonyi people.”

Apart from Umahi, other APC presidential aspirants from the South East were Dr. Ogbonnaya Onu and Emeka Uwaujiba both of whom got one vote each as well as Rochas Okorocha and Ikeobasi Mokelu, both with no vote.

In the PDP presidential primaries, Southeast aspirant Pius Anyim got only 14 votes while Sam Ohabunwa had only one vote.

Related Topics:Umahi slams betrayal by Southeast delegates at presidential primaries
Up Next