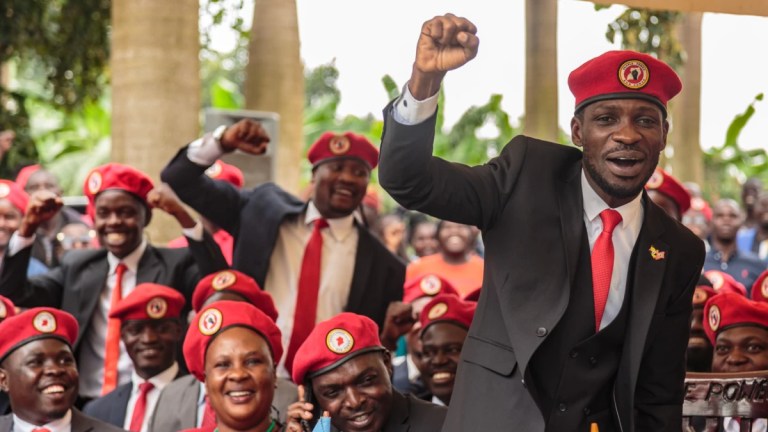 Ugandan musician and social rights activist, Robert “Bobi Wine” Kyagulanyi has said he and other Ugandan youths are working ‘day and night’ to see the fall of President, Yoweri Museveni.

Kyagulanyi said this in a DW-organised forum in Bonn for African creatives. He said Ugandans are tired of Museveni’s dictatorship as they want leaders who will serve them and make the country livable for them.

“Uganda continues to be under a tight military rule of General Yoweri Museveni, who took power when I was only four. I am 40 now,”

“We don’t want change for the sake of it. We want a situation where leaders are servants of the people.”

The forum themed “Creatives in Africa: To Go or To Stay” had African celebrities in attendance and Bobi Wine, one of Uganda’s foremost voices explained his decision to venture into the murky waters of politics after doing well in music.

His campaign saw him face tough times from security agents as he and his family were placed under heavy threats.

Although he lost the election, he had enough votes to reduce Museveni to his lowest votes tally in five elections.

“I had been talking about the issues for so long and I thought it was about time to act on them.

“I wanted to move closer to where the policies are made,” the National Unity Platform (NUP) leader explained, insisting he is no longer an entertainer but an “edutainer.”

He said the country has seen Museveni’s rise since he became President in 1986, and as a dictator, they’ll see his fall.

“There is always a rise and fall of a dictator. There is no rise and rise of a dictator,” he said.
“We already know his rise, we are working day and night to see his fall.”

Related Topics:We Are Working ‘Day and Night’ To See Museveni’s Fall
Up Next

U.S Comedian Bill Cosby Found Guilty Of Sexual Assault of a Minor in 1975