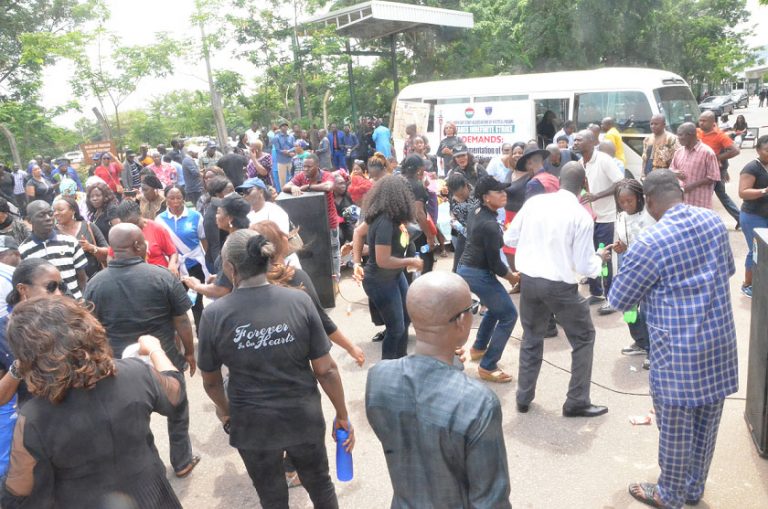 National Assembly workers yesterday continued their siege to the premises.

The workers, under the aegis of the Parliamentary Staff Association of Nigeria (PASAN), started what they called an indefinite strike on Monday.

They had blocked the gates to the complex and prevented their fellow workers, visitors and other ancillary service providers from gaining entrance.

Most affected were bank and construction workers either building new structures or renovating the dilapidated main buildings in the complex.

Senators and House of Representatives members had extended their recess to enable their political parties conclude their primary elections.

They are expected to resume plenary on June 13.

The Nation observed yesterday that the protesting workers had hired a caterer who was seen preparing dishes for them at Gate One.

They also brought in mats and other indoor games to sustain their siege to the complex.

The Nation also observed that

a disc jockey had been stationed at the gate and was providing musical entertainment.

Some other workers were seen dancing while others sat on mats spread on the road while playing ludo, monopoly and other games.

No vehicular movement was allowed into the complex except for members of the Armed Forces, Department of State Services (DSS), police and other paramilitary personnel attached to the National Assembly.

The workers had accused the management of the National Assembly of reneging on a Memorandum of Understanding (MoU) it signed with the union to fully implement the Revised Condition of Service and the training and re-training of workers.

They also asked for the payment of arrears of the minimum wage, leave grant and other allowances.

The Chairman of the National Assembly Chapter of PASAN, Sunday Sabiyi, told reporters that the workers would not back down until management meets all the demands tendered before them.

Related Topics:Workers continue siege to National Assembly over unpaid claims
Up Next

This Is Wickedness, Tinubu Not Fit To Rule But Feels Entitled – Aisha Yesufu