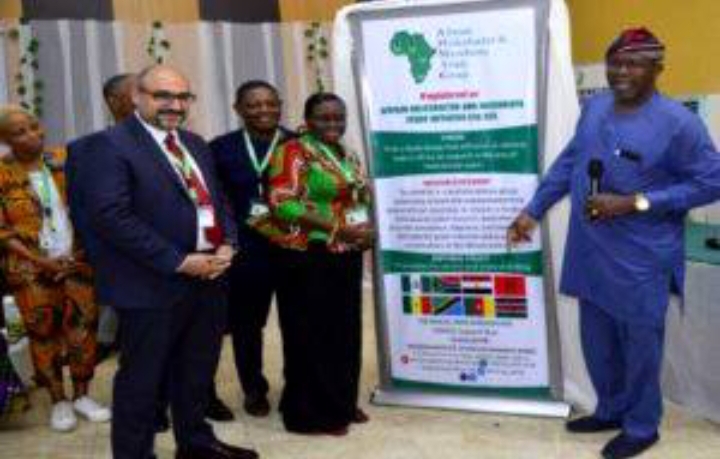 The Nigerian Institute of Medical Research (NIMR) has kicked off the African Helicobacter and Microbiota Study Group, AHMSG in a bid to accelerate scientific and medical research against the occurrence of Helicobacter pylori (H.pylori) in Africa.

Track News Nigeria understands that Smith, who is a Professor of Microbiology at the Mountain Top University, Ogun State and founding president of the study group, happened to be the only black woman to represent Nigeria and Africa on the European Union group working on Helicobacter.

Track News Nigeria gathered that she will be ministering the affairs of the Group that is also registered as the African Helicobacter and Microbiota Study Initiative, AHMSI, Ltd/Gte.

A medical expert told our correspondent that helicobacter pylori is a type of bacteria that infects the stomach and small bowel. The pathogen has been implicated in an ample of gastric disorders such as peptic ulcer, gastritis, gastric mucosa-associated lymphoid tissue (MALT), lymphoma, and gastric adenocarcinoma.

At the inauguration of the founding members of the Group comprising renowned scholars from Nigeria, Tanzania, South Africa, Cameroon, Egypt, Kenya, Senegal, and Morocco, the Director-General, NIMR, Prof. Babatunde Salako, said the study group is meant to advance H. pylori infection research, as well as determine its accurate prevalence, diagnosis, treatment and management of infection in the continent.

Salako noted: “This is one opportunity for bringing the group of Africans together who have experience and common problems to be able to use that platform to research into the occurrence of that bacteria, how prevalence, epidemiology, how to treat and how to prevent it. And most of the time, these things are done in the global world, and Africans are usually often left out.

“My charge to them is that what they have started today is not allowed to die. Rather they should water it and make it grow beyond what it is today because we have a very large population in Africa and Nigeria in particular. If this group continues to grow, then it can absorb a lot more scientists.”

Speaking at the opening, Stella commended the Richen Medical Science Group, the manufacturer of the equipment for H.pylori treatment and management, for being a major supporter of the AHMSI vision and mission.

“I wish to commend them for their support because they believe in forging appropriate diagnosis and management of H. pylori in Africa. They are also the platinum sponsor of the European Helicobacter and Microbiota Study Group (EHMSG), and they have reached out to other study groups, as their main aim is to reduce morbidity and mortality of H. pylori infections, so they have reached out their partnerships to Africa.”

Smith asserted that among instruments and kits manufactured by the Richen Medical Force, are the Urea Breath Test, and H. pylori Stool Antigen Test, both essential for diagnosis and management of H. pylori infections.

“H. pylori produce a lot of enzymes and after a few minutes of taking a particular prescribed drug, the level of carbon dioxide that the patient exhales is measured, and this helps to determine whether H. pylori is present or not.

“The Urea Breath Test instrument helps to diagnose H. pylori infection. It has the highest sensitivity of the non-invasive method of testing, especially in our environment.

“After testing with this equipment manufactured by Richen Medical Force, if it is positive, the gastroenterologist prescribes drugs and instructs the patient to come back for another test to check for eradication of the H.pylori. But we know that in Africa, the patient rarely returns for follow-up.

Another instrument is the Stool Antigen Test, which measures active H.pylori in the stool. “This is slightly less sensitive than the Urea Breath test, but either can be used in our labs to diagnose H. pylori.

“In my area as a basic medical scientist where I am so much interested in the partnership with Richen Medical Force, is their Urea Breath Test. It is what we use in the lab to diagnose the patient.”

Regretting that H. pylori are more or less a neglected pathogen in Africa, Smith explained that as a group, AHMSI is formulating guidelines for the accurate diagnosis and treatment management of H.pylori and its associated complications in Africa.

Further, she said: “More attention has over time been given to malaria, HIV & AIDS, TB, maternal and child health and in recent times COVID-19. This does not imply that H. pylori is not ravaging and causing a lot of health challenges on the continent.

“It has been reported that 50 percent of the world’s population are infected with H. pylori with people of different races and regions around the world having varying levels of severity and pathological outcomes.

“In a review, we published in the World Journal of Gastroenterology 2019 on infection with H. pylori and challenges encountered in Africa, it was revealed that the prevalence of H. pylori infection in Africa was as high as 80 percent “

Smith said it could be higher because some regions lack actual prevalence data and there was no African guideline as compared to the Maastricht V/Florence Consensus of Europe, American College of Gastroenterology, ACG, clinical guidelines, Toronto consensus, Asia-Pacific consensus, Chinese National consensus, etc.

“AHMSG is kicking off on the right footing as it was supported by the EHMSG that has been in existence for over 30 years and responsible for developing and updating the famous Maastricht /Florence Consensus for which I was a proud delegate of the 6th Edition last year,” she said.

The Consultant Gastroenterologist at the Department of Medicine, University of Benin Teaching Hospital, UBTH, Dr. Rose Ugiagbe, said H. pylori has become a source of concern as more than 50 percent of cases related to it are seen every day”.