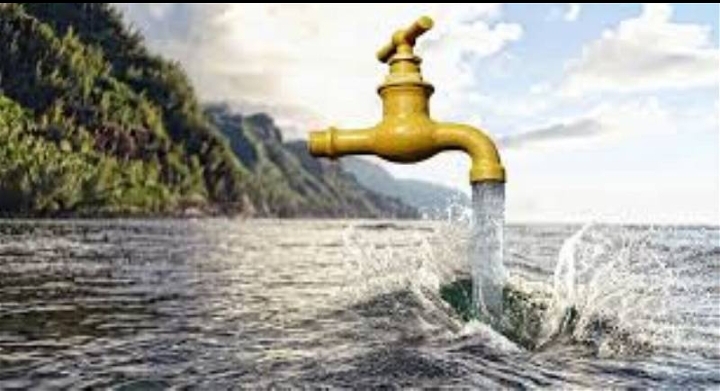 Hon. Awaji Inombek Dagomie Abiante, the legislator representing Andoni/Opobo/Nkoro Federal Constituency of Rivers State in the House of Representatives, has assured that lawmakers from the Niger Delta region will defend the interest of the people with regards to the proposed law on water resources that has recently been reintroduced.

The lawmaker made this known on a day the House said copies of the bill will be distributed to the lawmakers to study ahead of its debate in September after the annual vacation.

Track News Nigeria learnt that Abiante gave this speech when members of the Ijaw National Congress (INC) led by its President, Prof. Benjamin Okaba, paid him a courtesy visit in Abuja.

Track News Nigeria learnt the delegation was in his office to relay the position of the people on the bill to him in a bid that he will inform his colleagues about it.

Similarly, the lawmaker called on the people to build synergies with other ethnic nationalities for the best results.

In his words: “On this Bill, we’re all aware that this is not the first time this Bill is coming up. It has been introduced, and we have always stood in defense of the interest of our people. And we pray, and we can even pledge that this time, will not be different.

“We have heard from you, we have heard the fears, and this is our own fear as well. We will stand by it. The waterways, the rivers, the creeks are equivalent to our own farm lands. And we will look at it in that light. We may have suffered some injuries during the enactment of the land use decree which from findings was actually a minority report. But today, we have to live with it. But now that we are here, given the opportunity, we will continue to defend the interest of our people.

“Thank you for the visit. We honestly would love this visit to be at intervals, not a one-off, and we would have been better impacted probably at the commencement of every session, you find time just like this maybe not even in Abuja, a retreat so that we can x-ray the peculiarities of our people. So we would be armed with same as we commence deliberations.

“We will also urge you to build synergies with other ethnic nationalities who have presence in the National Assembly so that we can work together as a team, whether they are in the minority or in the majority.

“What’s important to us is for everybody to understand the position of the Ijaw man, to understand the value of this resources that God has given to us, equating it with several other resources that are being managed by other interests son that we can honestly arrive a law that is necessary for Nigeria as a country, whilst not giving our own interest. And where the laws are also not exigent at this point, they should be jettisoned”.

Recall our earlier report that the INC President, Prof. Benjamin Okaba, the INC had given the reasons why Nigerians and Ijaw nation should reject the bill.

“Not withstanding that the Bill seeks to inter alia commercialize the utilization if water resources via a licencing regime and collapses previous legislation relating to water resources into a single instrument, the reintroduction of this Bill in the twilight days of the Buhari led administration; and at such a critical time in the history of the Nation Nigeria with the various recurrent challenges really cal for circumspect on the part of well meaning Nigerians, and indeed the Ijaw nation in the consideration of the Bill, which appears to be targeted at controlling the coastal environments of the Ijaw nation.

“That this Bill is a surreptitious attempt by the Federal government to usurp, erode and indeed witrle down the powers of the state Governors by the institutions to be established which are characteristically constituted/composed of majorly by persons from the Northern regions of the country who can and indeed will obviously exploit the objective provisions of the Bill to the advantage of their kinsmen, the Fulani herdsmen, to infiltrate the coastal environments without any inhibitions or control whatsoever, under the guise of “public interest” and citizens equal right of access to waterways, etc, to the detriment, prejudice and harm of the indigenous customary and ancestral owners and users if water ways (the Ijaw people).

He added: “The express inclusion of Land as part of the resources to be managed bybe institutions established under the Bill is a subtle but deliberate usurpation of the powers of a state Governor in violation of the provisions of the Land Use Act of 1979 which entrusts all lands within a state on the Governor for the benefit of the citizens.”

Thus, at the plenary on Thursday, the sponsor of the bill and Chairman Committee on Water Resources, Hon. Sada Soli (APC, Katsina) directed the House clerk to distribute the copies of the bill amongst the lawmakers.

He appealed to his colleagues to painstakingly read the bill which would be listed for debate in September.

“I just want to inform the members now that the bill has been re-gazetted. Now I’m calling on the clerk to please ensure that bill goes to every member because of the importance of the bill and I call on my colleagues to please kindly take time and read that bill, subject that bill to it to a third party. You have time now to subject that bill back home during our holidays.

“We will not take that bill in a haste. We will give every member the opportunity to look at that bill from clause one to the 154 clauses, honestly, sincerely and I am talking on my owners and given the responsibly as the chairman of the committee on water resources. I will not be party to any shenanigans of any legislation that will impact negatively to any community in the us country. Please my colleagues, take the bill, read the bill and subject it to third party for more information before we consider this bill before the House.”

Related Topics:Rep Vows To Protect Niger Delta On Water Resources Bill
Up Next

Rivers PDP Set To Disqualify Accord Party From Gubernatorial Election

REVEALED: “I Didn’t Reject Wike But…”