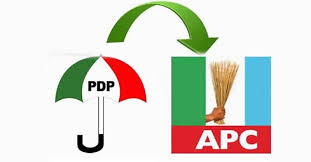 In the Yakurr Local Government Area (LGA) of the central senatorial district, more than a thousand members of the Peoples Democratic Party (PDP) in Cross River State have switched to the All Progressives Congress (APC).

According to Track News, the defectors claimed that Senator Bassey Otu, the APC’s nominee for governor in Cross River State in the general election of 2023, was more well-liked than his opponents.

Anyone with a clear conscience must back Sen. Prince Bassey Otu, according to Nelson Ofem, the defectors’ leader. We made the decision to convert since we learned that the APC had a vibrant and modest candidate.

Alphonsus Ogar, the state’s APC chairman, welcomed the defectors in Ugep and assured them of fairness and equity in their new party while reiterating that the APC remained a unified party in the state.

Bassey ends his advisory visit in the Central Senatorial District.

Advertisement
Related Topics:000 PDP supporters switch to the APC .1
Up Next

Candidacy of Delta PDP for Governor: The Plain Truth